I was using the part AMPHENOL - ACJS-MHDR, which is a stereo jack for quarter-inch “phone” (6,3mm Klinke) connectors used for headphones (the “big” connector, not the mobile-phone-sized) and electric guitar cables (which is my application).

The hole positions are just right, but the diameter of the holes is way too small for the part I have available:

The holes are 1mm diameter, but the pins are 1.5mm diameter.

So now I had to try and solder the jack on top of my Aisler Fab PCB instead of putting the pins through the holes, and that of course did not work.

How do I go about on this issue?

Parts editor can’t currently do this. You would need to edit the pcb svg for the part with a svg editor such as Inkscape to increase the hole size. These two sets of part making tutorials may help

or if you supply the .fzpz file for the part you are using I can modify the hole size (it is a trivial change for me.)

Edit: As a new user, I can only put one embedded media into a post, so I have to split this up.

Okay, thanks alot! I installed Inkscape, copied the part using the part editor, then edited the file in Fritzing\parts\svg\user\pcb with Inkscape so it has bigger holes. Unfortunately something is wrong:

With the second error message, last line, it says breadboard.Klinken… with a dot in between. The subfile actually is in breadboard\Klinken… subdirectory. Is this a bug?

I was confused that for the original part, the size in mm in the svg file does not match the actual size on the PCB. Actual size is around 1.5 times the size given in the svg, according to Inkscape.

This is the original part:
AMPHENOL-ACJS-MHDR.fzp (5.4 KB)

My changed SVG (I do not need the single left connector either, it is not connected to anything in the original part):

Ah! Your problem is that the svgs are dimensioned in px. 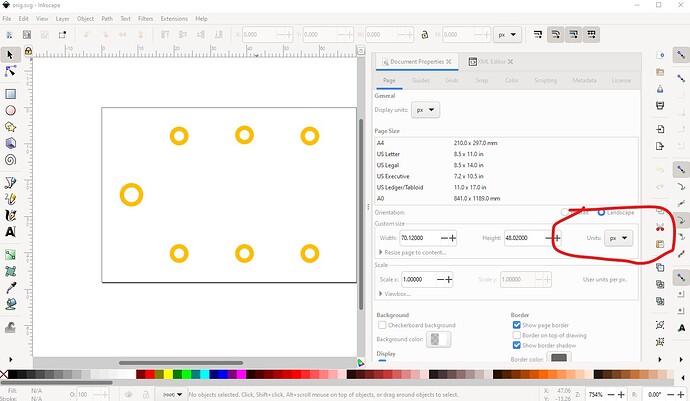 As a result of this, Fritzing makes a guess at the DPI in use (possibly 72DPI if this is an old svg, possibly 90DPI if it is newer but not the latest.) Current Inkscape is using 96DPI so the svg will be scaled incorrectly. I’ll correct it in a bit when I finish a part for someone and post a corrected svg.

Okay, thanks alot! I installed Inkscape, copied the part using the part editor, then edited the file in Fritzing\parts\svg\user\pcb with Inkscape so it has bigger holes. Unfortunately something is wrong:

This particular error is as a result of not having the necessary copper groups in the pcb svg. This is your new pcb svg 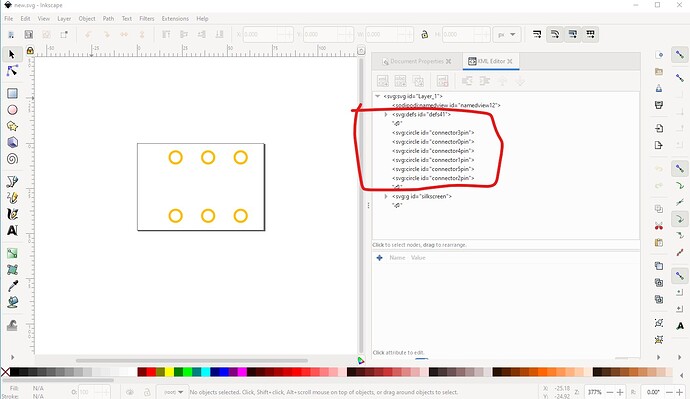 it needs to change to 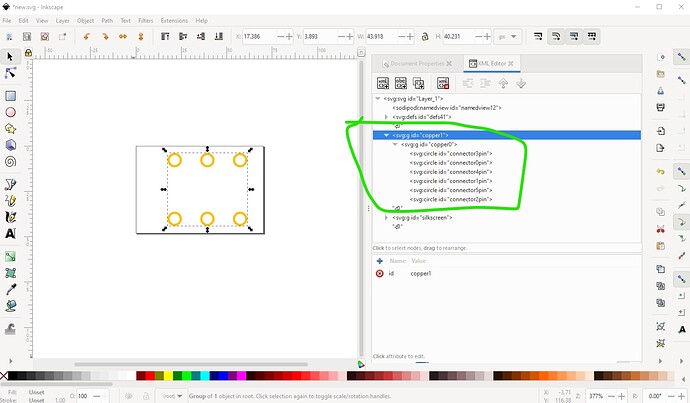 that would clear the rendering error, but still be incorrect because the svg is dimensioned in px.

I’m not entirely sure why this error occurred. It may be a result of the render failure, but I can’t say I have seen it before. The breadboard.Klinken… part isn’t necessarily an errror or bug, because the breadboard svg file in a fzpz file is of the form svg.breadboard.Klinken… and is converted by the loader into breadboard/Klinken… so it may have been reporting some kind of error in the .fzpz file (assuming this was loaded from a .fzpz file!)

The original svg is indeed at 72DPI and current Inkscape is using 96DPI. That causes this scaling issue 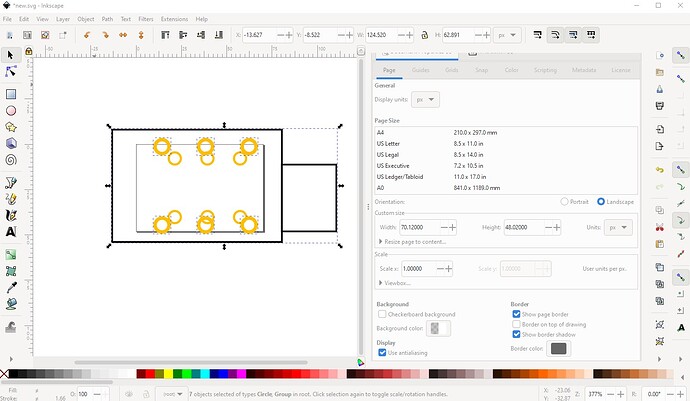 here I copied my corrected pcb svg and pasted it in to your new svg. As you see the new svg (which is correct at 96DPI) is larger than yours (which is 72DPI displayed at 96DPI and thus scaled smaller!) It is possible to correct this by rescaling from 72DPI to 96DPI (which assumes you know the original is 72DPI with units in px and how to rescale it in Inkscape!) However it is is probably easier to use parts editor to edit the part then save it as a new part (which will write the part to the mine parts bin), then export the resulting fzpz file from the mine parts bin to an fzpz file and unzip it to get the svgs. Parts editor appears to change the svg dimensioning to in on export, insuring the scale is preserved. I assume you were editing the svg in the Fritzing directory here which will give you the svg with the dimensions in px and cause the problem. The parts editor is what I used to create the new part below which has a variety of improvements (mostly to bring it in line with current part requirements.) Breadboard is pretty much identical (it has been rescaled, but that makes no practical difference!) Schematic has been upgraded to meet the graphics standards (which the core part doesn’t) and match the names in the datasheet for the connector better. Pcb has the pins set to the correct size (holes are 0.06in) and silkscreen modified to reflect the correct outline of the part which the original svg does not, it also shows the offset on the barrel entry where the original didn’t show the barrel at all.

, that would have taken me a year to figure out! The new part seems to work great

I am looking forward to my next PCB order!

I feel kinda bad that you did this for me only. Is there a way to include this part in a future release of Fritzing? The old core part seems to have a number of issues, plus it cannot be sourced anymore (at least I could not). Your new part solves all those issues.

Besides your name, it says “leader”. Does that mean you are working at Fritzing or something? Can you get this into the next release? That would be great for all future guys who try to build a guitar effects pedal shield (see electrosmash.com)…

I feel kinda bad that you did this for me only. Is there a way to include this part in a future release of Fritzing? The old core part seems to have a number of issues, plus it cannot be sourced anymore (at least I could not). Your new part solves all those issues.

) submit it to core parts. That is partly why I upgraded it, as eventually I hope to fix up all of core parts to be correct but it is a long slog! We are doing the potentiometers now (have been for a while in fact.) Part of what needs to happen is parts documentation and standards needs an upgrade and that is being discussed too. In the mean time people can find the upgraded part here in the forum.

That is great news!

I am new to the electronics hobby, and I find sourcing the right parts a very major challenge that I did not anticipate. Resistors and capacitors are no problem, but e.g. finding the right op-amp has been a real challenge for me (rail-to-rail audio OPA that works from 3.3 to 9V). When I found an OPA that could do that, it was not available to me in any shop worldwide. I finally ordered the TL972 from USA. Pots, jacks, switches all have the same problem - parts that can be ordered are usually not in Fritzing, and Fritzing parts usually cannot be ordered. None of my trimmer potentiometers fit the Fritzing “trimmer potentiometer” or “rotary potentiometer small” parts.

In my opinion, what is really missing is a partnership of the Fritzing Lab with an electronics store, so that, if you use only core parts, you can order the PCB from Aisler together with the complete BOM from the partner store. If a part becomes unavailable, it would be removed from Fritzing core parts and replaced by an available part through the partner store.

This would also make the Fritzing “share online” function into a kit ordering store, which would be fantastic!

The ACJS-MHDR part is still available, mouser has over 3000 available. Most parts even old ones are available somewhere, it is just that shipping can make them uneconomical. Ebay is often a good choice, but delivery time can be long (as the parts typically come via mail and often from China which can take months) again faster shipping (i.e. FedEx) is available, but typically expensive. Pot outlines vary a lot (and some in core are incorrect!) and haven’t been updated in at least 5 years, but many of the footprints are still available at least somewhere.