I just started to use Fritzing to explain how to connect parts. Most of my projects work with the Grove Base Shield and Grove Sensors. I have managed to import and use the file for the Base Shield from this forum, so so far so good.

However, I wanted to connect a Grove - Temperature&Humidity Sensor (DHT11) https://wiki.seeedstudio.com/Grove-TemperatureAndHumidity_Sensor/#schematic-online-viewer to this, but I can’t find it. When searching for parts I read that you need eagle files to create a new part. As far as I can see Seeed Studio provides this. Only, where do you go from here? I can’t open the Eagle files with the programs that are on my laptop (MacBook pro Big Sur). Can someone give me some guidance as to how to make this Grove sensor for Fritzing?

Welcome aboard. I appear to have made one for someone here:

There doesn’t appear to be one yet, but I found eagle files for it on the seeed site (which is fortunate, because there is no apparent dimension data on any of the web pages I saw). I will be out for the rest of today so it will probably be tomorrow for a part. Peter

A google search for “fritzing part seeed grove dht11” turns it up.

I already imported that one, but unfortunately it is a different one (I think Grove has so many different temperature sensors, crazy, haha). !

It does look like this:
Grove Temperature Humidity Sensor DHT11|500x500

While the usual answer would be they are electrically identical (and thus the same to Fritzing), it was easy enough to adjust breadboard to the one you have … 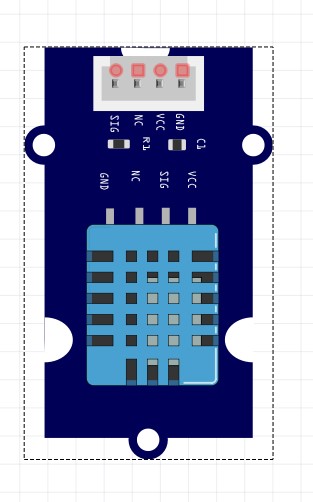 There is an Eagle2Fritzing program to do the conversion. I do not know if there is an install available for Mac, or if it needs to be built from sources.

There are other ways to create Fritzing Parts (see tutorials in the Tutorials - Guides category on the forum), but starting from the eagle files is much faster, and more likely to be accurate. One of my (failed) tests to get Eagle2Fritzing running on linux seemed to indicate that (Windows Only) eagle software is also needed.

One of my (failed) tests to get Eagle2Fritzing running on linux seemed to indicate that (Windows Only) eagle software is also needed.

The adafruit version of Eagle2Fritzing looks to be built on a Mac. I didn’t know that Eagle wasn’t available for Linux (as I did it on Windows) that is a disappointment! The comments in Eagle2Fritzing indicate Eagle shouldn’t be required for late version Eagle (it is xml based), but I think the requirement is still in the code to support old Eagle files. It may be worth poking at the source to Eagle2Fritzing to see if we can get a Linux version running. That said, it wouldn’t have helped in this case, there aren’t any Eagle files for this particular board. The Seeed one that I used to make the original part had errors or didn’t work well in Eagle2Fritzing, but was close enough to get a part.

The autodesk site indicates eagle is availible as a free download for 32 and 64 bit linux. You do need QT and a Fritzing dev environment to build Eagle2Fritzing, but as I recall you already have that, so building a native Linux version should be doable (probably easier than Windows

ndicates eagle is availible as a free download for 32 and 64 bit linux.

I’ve saved some links to look at later. Also on the list is to rebuild my QT and Fritzing environment on a new Fedora distro. 33 is current, my vm is still 31.

It does seem cool to make your own parts, especially because I’m experimenting with some SMD sensors at the moment. Will look into it

Unfortunately Eagle2Fritzing probably isn’t the place to start. To build it you need the development environment (QT and the Fritzing app source tree) which is not a trivial install. Even to use it once built you need to be quite familiar with parts creation because the Eagle2Fritzing output needs a lot of editing (for instance all the connections of all the ICs will appear as connectors and need to be removed.) These two tutorials in the guides and tutorial suggestions are probably a better place to start:

They both apply to 0.9.4, most of the rest are for earlier versions, and are some times out of date. The part build process is fairly complex (and poorly documented!) with a lot of not necessarily obvious dependencies in the xml that will cause problems. The parts editor tries to make that simpler, but it was not finished when development stopped in 2016, and has enough limitations that I don’t use it, rather edit the underlying files directly. It is probably easiest to manually create a part by cloning something similar (which is what the tutorials cover) rather than jump in to Eagle2Fritzing even though Eagle2Frtizing can be easier once you know what you are doing especially for creating accurate breadboard and pcb svgs (since it comes from the data that made the real board!) I usually toss out schematic and make one from scratch from the template file in my tutorial as the generated ones are incorrect (as they are in the Fritzing source which needs fixing when we get time.)