Thanks for Fritzing. It’s great piece of software. I’m now during creation of huge bundle of custom parts components for schematics and I would like to publish my work for others. I would like to point Fritzing as a software worth to use but to download it from official website there is a necessary to make a donation. For most of the people it may be an impassable obstacle. Is this donation mandatory to Download Fritzing? If not can I suggest to create account and use option “I already paid”.

If you type paypal in to the forum search bar you will find previous discussions on why the paywall is there (basically to fund development.)

Well, I bought it yesterday but was kind of amazed about the fact that the donation is needed for development and the last release was more than 9 months ago. Don’t get me wrong; the software mostly works great for me and I’m happy but I get the feeling this will be one of the last releases. If so, you might want to reconsider the stated reason for the paywall?

Hi, I am a new user. Looks great!
It is a general a pity that there are great projects, used by so many - and very few dollars pr. user would make all the difference - but no. Great developers get next to no money, and have to spend (waste!) their time on something commercial where they get paid.
Paywalls are always problematic. The user may not even use the program, or it may not even run.
(I had that problem at first, with the SSL 1.0.0 lib requirement. Luckily the Bionic Linux version did not have that.)
I suggest Fritzing makes a small recurring donation options - e.g. 1,2,3,4 and 5 USD/month! Or whatever.
This will be easy for most users to accept and they can cancel again.

A new user here. I usually use Diptrace software but decided to download Fritzing based on what I have seen on Youtube. However, I don’t think a mandatory payment in advance - of a compilation of free source code and of something that you have not even been able to test if it works for you - is something one can call a “donation”.

I don’t know what the GPL rules say and how the educational institute that created the original free source code feels about “mandatory donations” so I think it is fair to simply call it a payment, what it actually is.

Maybe this project is something a larger group should take responsibility of and with voluntary resources has the possibility to keep it free for everyone.

Maybe this project is something a larger group should take responsibility of and with voluntary resources has the possibility to keep it free for everyone.

The short answer is that is what was tried starting in 2016 and it failed (and Fritzing was dying as the libraries got outdated.) The donation rate was something like 0.01% of downloads. The required donation is what funded the 0.9.4 release (the first in around 4 years.) there is a 0.9.5 release pending (don’t know when though) There is a lot of discussion of this topic in the previous forum posts, but the bottom line is the required donation appears to be working when nothing else did. I know because I spent the time since 2016 trying to get development restarted by volunteers and failed. I’d suggest reading the past posts on this subject in the forum.

In addition to what Peter said, GPL says (effectively) that the code is freely available. Fritzing code is free. It is in the publicly available github repository. If you have the tools, skills, time to build it yourself, no donation is needed. GPL does not say that an executable needs to be provided.

If you have the tools, skills, time to build it yourself, no donation is needed.

Having done this (and documented the procedure in the developers section of the forums) I can tell you it takes at least 3 or 4 man days to get a working development environment to produce a release. An 8 euro donation is a lot cheaper (and much less frustrating) way to do this, but you can do it if you wish … Note as well the donations also support the forums and the web site (bandwidth and servers are not free!). There has been much (largely invisible) work going on to upgrade the forums and web site as they hadn’t had any maintance in around 4 years and were falling apart.

@vanepp i was just pointing out (or intending to) that complaining about the donation before download due to the code being GPL was not appropriate. The binary download is not “the code”, and the GPL restrictions do not apply to it.

I know and didn’t mean to imply you were incorrect. It has always been the case that is is fine to charge a fee for an installable version of gpl code as long as the code is available to build for your self. I was just pointing out the cost of avoiding the donation. To me I’d rather pay the 8 euros for the binary rather than do a number of days of fairly frustrating work to avoid it. However if you want to contribute to the Fritzing source, you need to do the work anyway, but to only use Fritzing the 8 euros is cheap compared to the time cost of compiling it yourself.

Exactly. But from the messages seen here, some people do not understand that.

What I like about Fritzing is that user can export gerber codes from design- which are universally accepted by most PC board houses. Initially, when I was researching design software, most affordable downloads produced exports that could only be manufactured by their in house services. Production prices were much higher than generic board houses, which use gerber codes, so you were ‘locked in’ to their network. What if you weren’t happy with that production pricing or product results?
Jim

Thanks for answers in this topic and for clarification.

I am not criticize the idea of paying for the software IMHO this is a saint law of developers who just want to get some benefits from the hard job.

But apart of this I have some opinion regarding this.

I think, this program was created for amateur electronics for educational purpose also. Not for developers who can build the app by Your own. As I said before getting paid for this is Your saint law but please do not name it donation anymore If it’s not a donation

All the best,
Darek

It doesn’t say donation on the DL page, but I think the 25 euro is.

FZ was made open in 2016 when the money ran out and not one person wrote code for it, so that model never worked. Basically FZ is unpopular with smart people so never attracts people that can code - it’s like how Mac is not popular against Win -. FZ is pretty much condemned by most, and it’s only a few enthusiasts that keep it going, so it’s either pay, or FZ goes in the bin - last year FZ broke and was already in the bin -. It’s not like the pay system is making much money anyway, I think it only employs 1 coder.
If you don’t need the BB view there are much better programs, but if you do you have no choice because no other EDA has a circuit design breadboard view - you can actually just draw a circuit in Inkscape if you only need BB view -.

It just depends on your needs-
I downloaded V9.3.32 in 2016 because I needed a PC board quick for a contract job. FZ seemed the easiest and fastest to become useful- and it was… I met promised timelines. That project grew, subsequently turned into a rather hi density, complex 4" square board (pic below).
Also looked at PCB123- it has more features, but decided against because of the learning curve needed. Also, at that time, it required proprietary manufacturing, as I said before. Now I see they’ve added gerber file exports, but there’s a catch (note 1) on website which could mean a lot of things.
I’m not dissing PCB123- If I was looking to go into the board designing business, I would spend the time to learn it. It IS a powerful software.
Jim 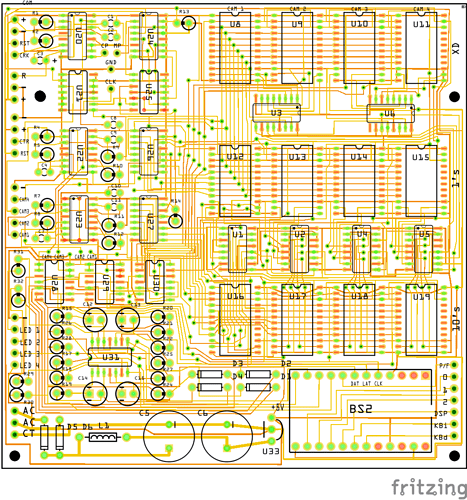 I haven’t heard of PCB123 so don’t know about it, but I think everyone has gone to KiCad.

Everyone used to use Eagle so you always used to see Eagle download links, but because it’s only 2 layer and 100x80mm everyone went to free KC. I started KC at the same time as FZ and it wasn’t very good - I liked Eagle better -, but now KC is quite good, ie, it now has FZ features, plus every part must be certified by KC before it goes in the program. These days you don’t really have a choice but to install KC, because it’s so wide spread you can’t view anyone else’s stuff without it.