I can’t seem to find any male dc barrel jack plugs like the ones found at sparkfun PRT-10287
DC Barrel Jack Adapter - Male
Seems like such a basic part they have the female version in power but not the male or am I missing something totally new to all this.
Thanks for any advise.
Ryan

Someone else asked about this in relation to connecting a 9V battery to the arduino part some time back (although I can’t at this moment find the thread). In his case the Arduino doesn’t have a suitable connector on the power jack to connect the plug into. I think thats probably why there isn’t one, there isn’t an easy way to make it connect to the female in breadboard in a way that will cause the connection in schematic. It would be easy enough to make one but it would only be cosmetic not particularly useful without being able to connect.

Parts auto connect to the BB, can you put that bit of code in to the plug. You would also have to add the contacts to the plug so it has something to join to when you overlap the 2 parts.

Do you know of a part that has the code to connect to the BB? I suspect it may be part of the internals of BB in core and thus not generally available (but then I’ve been wrong before too

That suckz. You can save the BB as a new part to get to the code.

I’ve done that for Brad’s board and it isn’t all that special (it suppresses terminals is about the only non standard thing visible). The magic takes place as its family as breadboard or perhaps breadboardbreadboardbreadboard. This seems to be the trigger for internal magic (always on bottom, perhaps the auto connect) to occur. I’ll have a poke at things (its possible using male and female connectors may make this work, one connects to the other in breadboard so that may be the magic) when I finish Brad’s project.

I thought I would provide a picture of the project I’m trying to create the part for. It’s a dimmer for a 12v LED strip.
12v goes into the BB and powers the UNO and the LED strip. The only parts I can’t find are the 2 male barrel plugs. 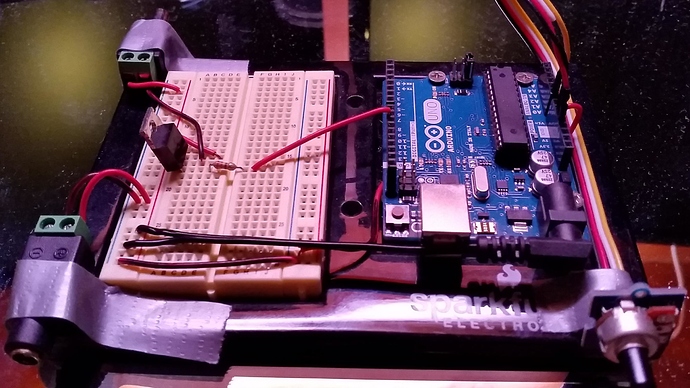 Ah, a yet again different use case

Thanks for all the help and input anyway.

Is that the version with the pin in the center (as there is one of those in core although on a board rather than as a jack) or the connection from a wall wart which has the hole in the center? There is a part called power plug (search for power plug) that doesn’t show the pin just a top view of the connector which would let you fake it. I haven’t seen any of the ones as you show, because they aren’t that useful in Fritzing because you can’t connect them to anything . The silver part disappears in to the black of the connector when connected so the blocks are more useful. It may be good to have one as you picture but without the silver tip (just the black body) that would connect to one of the sockets (that is what the last person looking wanted, to be able to plug in the battery and have it appear in schematic.

)? By the way the coax screw adapter in your picture is available in the adafruit repository (which is separate from fritzing’s). I can’t immediately get Inkscape to only export the image (my png viewer was showing a large black background as well as the part)

well that turned out better here than in my preview anyway. I’ll poke a bit at seeing if I can achieve making that “plug in” to a modified coax jack such that the wires on the end will connect to the leads on the jack (which is what the original person wanted, and what would be reasonable for Fritzing). Making the end of the tip transparent with connectors in it that mate to the jack may be possible to allow it to “plug in” in breadboard. 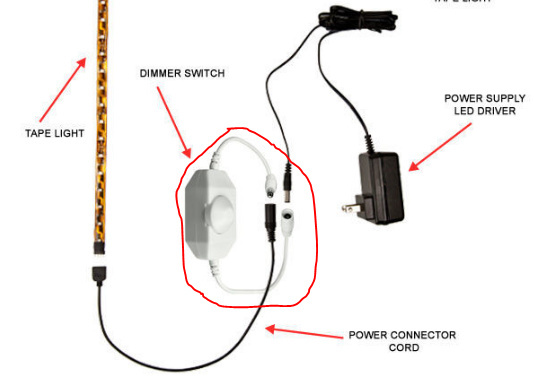 Here is my Fritzing sketch, for now I’m using a screw terminal for the Vout. But another question I have is how do I show the 12v source from the BB to the UNO barrel jack? As the sketch is currently the UNO would require a separate power source. 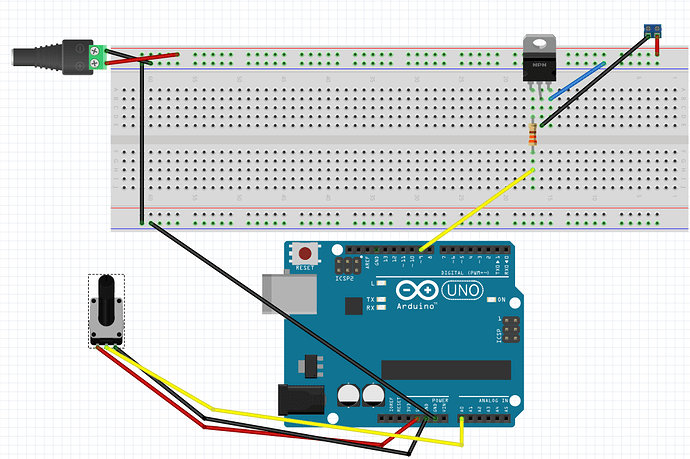 The thing about FZ is it’s not perfect in BB view, because it’s too complicated to make it real world.

The plugs in FZ usually have pins on the circuit side but not on the other side, ie the pins of the plug connects to the circuit but don’t have provision for anything to plug into them. If you add the extra pins to the part you would still have to connect them with wires, unless someone knows how to make an auto connect pin like in the breadboard.

Sorry, I should have been clearer :-), the adafruit repro only has the barrel to screw terminal part (and then I think perhaps only female). The image I posted was an edited version of the core RCA jack (of all things

. I’m in the process of making a male coax connector with bendable leads (i.e. wires in the real world) on one end and a couple of invisible connectors on the metal barrel end. The idea is to modify a female coax socket to also have two invisible connectors where the barrel should plug in so it will connect when you move the jack over the socket (and internal busses will make the electrical connections). I don’t yet know it it will work, but if it does it opens up the possibility of adding a wall wart which can connect as in the real world to Fritzing which is mostly why I’m trying it. From something Steve (SteelGoose) said some time back I thing the connector secret is male and female pins in the fpz file in the part. Male pins (which is the standard for normal parts) connect to female pins (which the breadboards use) so I’m hoping that’s where the magic is. As a side effect it should give you the part you want as well.

That sounds awesome thanks so much for all your help and advise on this.

Well knock me over with a feather! This hare brained scheme actually appears to work at first blush, Some notes, the plug is a bit odd in that the bendable leads are female (as opposed to normal connections which are male), so you need to drag the wire from the connector to the end of the bendable lead to make the connection. But other than that as this sketch demonstrates this appears to work. If you download this you can export the 2 custom parts from the temp parts bin which will at least give you a male barrel connector breadboard icon (and its associated female connector if you actually want to try connecting it). You can (and probably should) move the plug to top in part->raise and lower as that is how it is designed to look plugged in. The connection doesn’t appear to care as in the sketch it is the wrong way but still connects. The schematic view is truly ugly as I’m no artist, if one of you artistic types would like to come up with a better schematic view I would be most appreciative

. I tried to get across the jack connects to the plug but as I said its ugly. Its also currently hard to reproduce if you make changes with Inkscape. I have a perl script that does a number of things (removes pxs and inlines style commands, as the first breaks fonts and the second breaks bendable leads (as does most anything else come to that

). Even then manual editing is required because the perl isn’t entirely correct yet although it is getting closer. Consider this experimental for the moment. I’ll probably try and cobble together wall wart and battery parts that can use this (as that is the primary use case as far as I can see). Luckily I remembered to try and load this file before posting, as it was broken. I needed to get the new plug blessed by loading it in to parts editor and exporting it and then using the exported version of the file. My original unblessed part loads fine but won’t reload as part of a sketch when saved. This at least reloads for me so hopefully it will for you as well.

Re: the DC barrel at the back of the Arduino - after much frustration with the poor quality of the Mega 2560 (the layout is dimensional way off and a lot of the connections are missing) - I have reworked it. Included in that are connections for the barrel jack. Once I have fully road tested the new version I will post it here for feedback and then GIT it. If the Mega meets approval, Iwill do the same for the Uno and a couple of the other other popular 'duino boards. It is quite a radical departure especially in the schematic view, so people will probably hate it.

I was going to create a plug for it. Looks like you beat me to it @Vanepp, big thanks. Even if I have to polish / tweak it a bit, it’s a big help.

You are mos welcome, it certainly needs some tweeking

@vanepp - how did you save the BB as new part to get to the code please? Save as new part is disabled for me on all breadboards…