Install Inkscape 0.92.4 (or more current version, 1.0 is in beta now but not stable enough to use)

which gives this as the default starting point. I do not know how (or if it is possible) to configure this in the preferences file or other config file, so it will open with a different default. If someone does, please post. 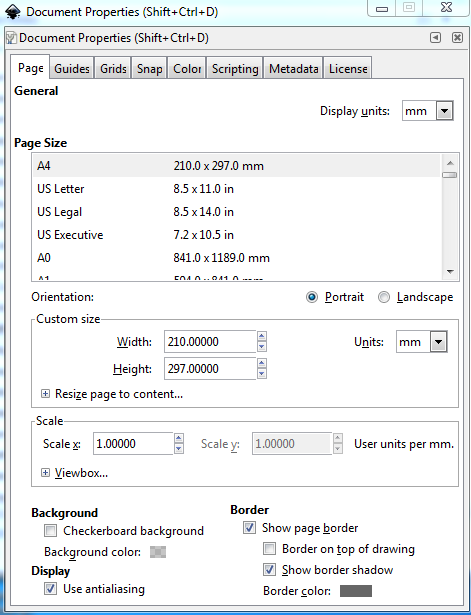 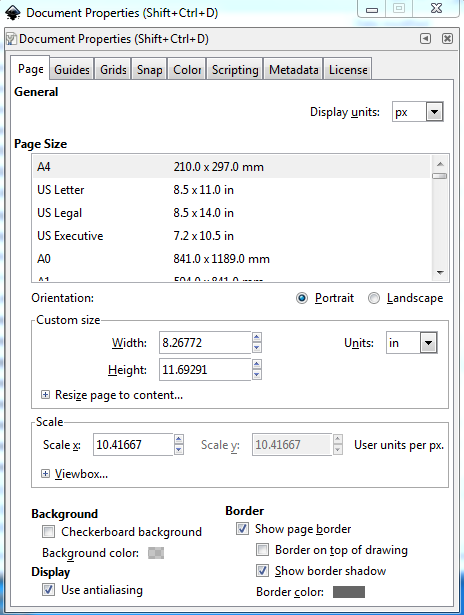 unfortunately you need to do this for every document from the gui it appears. In the case of an existing svg file, the two unit changes should just work, but if the scale is not 10.41667 you will need to rescale the document in which case see

Now change the Inkscape preferences (this only needs to be done once, and will be written in to the preferences.xml file for later invocations)

I prefer to open with a window that isn’t full screen, but large, pick which you like. 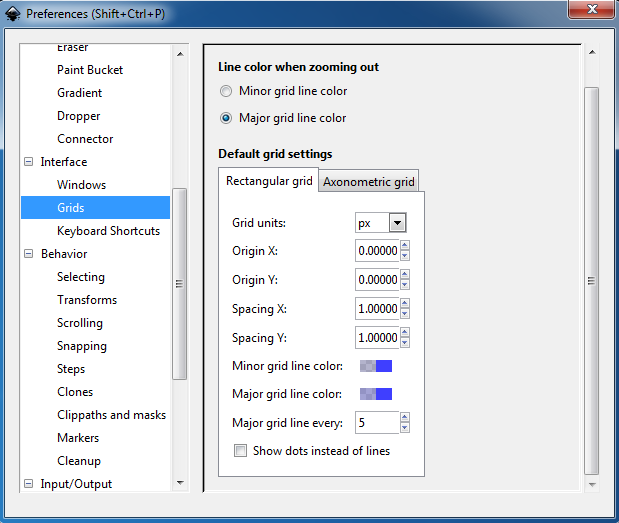 and change it to this: 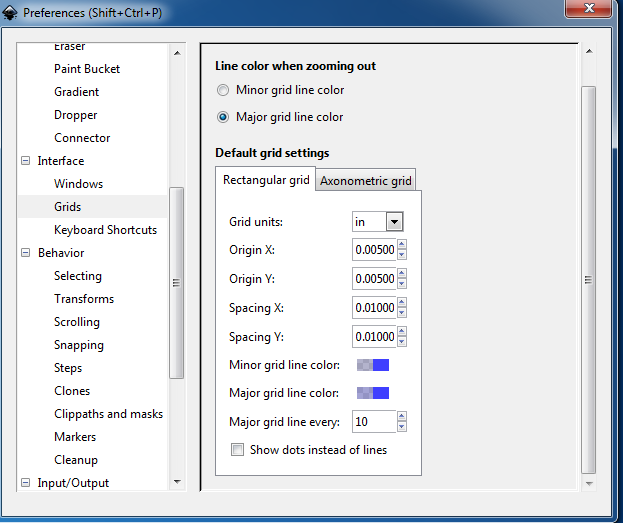 x and y offest of 0.005in so a 10 thousandth inch wide line in schematic will be centered on a grid line when it is on a 0.1in boundary. This makes visually checking alignment easy. You can change this from the File->Document Properties->grids page on the fly in a document if you need to align the grid to a pin that is off the .1in grid which is sometimes useful. Changing Major grid lines from every from 5 to 10 means (along with the 0.01in Spacings) that at high zooms you will see 10 minor grid lines between two 0.1in major grid lines. This makes aligning something exactly between two 0.1in lines easy. When you zoom out the minor lines disappear leaving you with only the 0.1 in major lines visible. Again change this to your preference. Having set this in preferences, just close the dialog window and it will write the changes out to the preferences.xml file the location of which can be found in 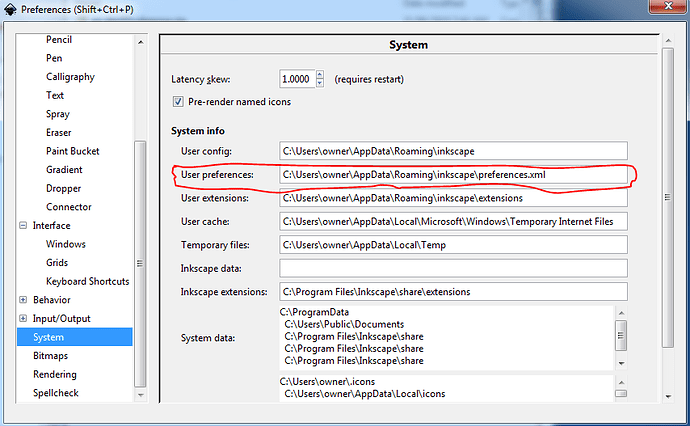 I find it to be a useful practice to take a copy of this file in to preferences-install.xml, because I regularly do something (probably an accidental key press that sets some hot key) that screws up the operation of Inkscape. In such a case, close Inkscape, copy the saved preferences-install.xml file in to preferences.xml then restart Inkscape and you should be good to go again til the next time. You can also just delete the preferences.xml file and Inkscape when it starts will create a new one with default settings (you then need to make the above grid changes again though, and I am lazy …) The one other thing to note on Inkscape is that it is best for Fritzing to use File->Save as then in the “Save as type” field at the bottom select Plain SVG rather than the default Inscape SVG (which adds a bunch of Inkscape specific xml that Fritzing doesn’t always deal well with.)

Below is an example of what this gives you in relation to a Fritzing part. This is a simple two pin schematic svg zoomed out, so you see the 10 minor grid lines and how both the pin and the terminalId align to the grid when properly positioned on .1in boundaries. The scale (on the right) is set to 10.41667 as it should be and Units (a bit above that) is set to in. Setting the Units to px is an error, as px has had at least 3 definitions, 72dpi (early Adobe Illustrator), 90dpi (Inkscape 0.92.1 or .2 I think) and 96dpi (Inkscape 0.9.2.3 and later). Fritzing attempts to guess which dpi was in use, and often gets it wrong which results in scaling problems in your part. If you run across an old part that is dimensioned in px, you can (with difficulty!) use the rescaling howto to rescale the drawing appropriately and then save it with Units of either in or mm (which are not subject to guessing about what the dpi was.) Happy part making! 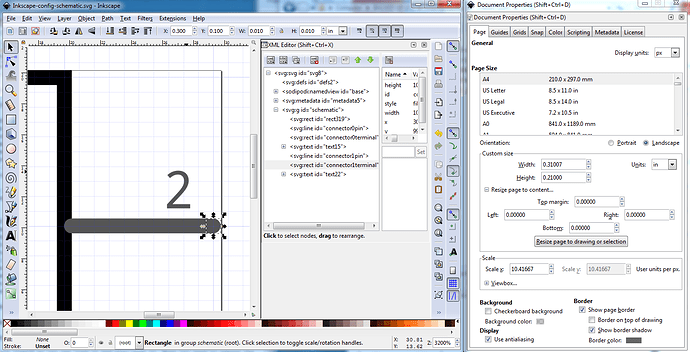 the same document except zoomed out til the minor lines disappear, leaving only the .1in grid 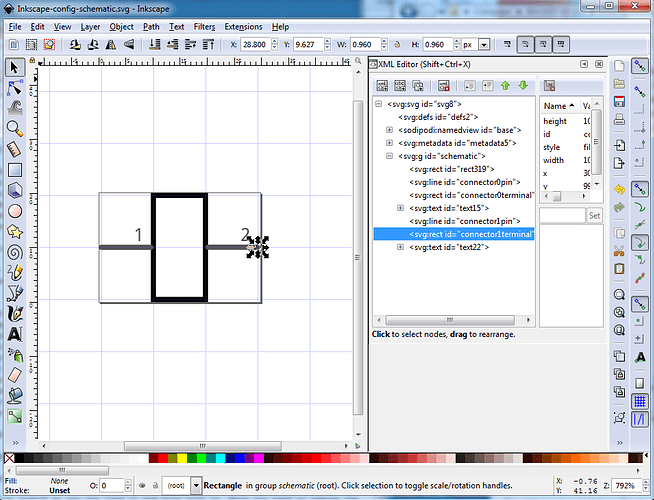 Examples of how I use Inkscape in making Fritzing parts are available in the two part making documents:

Inkscape is great, esp. for being opensource and free. Inkscape is pretty easy to use and has a lot of neat, hobbyist, plugins that do interesting things.

Illustrator does lots of things Inkscape does not do, but as far as vector illustration goes, all vector illustration software does most of the same things: shapes, paths, node editing, text, clones, symbols, etc. . The shortcuts will be different, and some tools are unique to each program, or will require fewer/or more steps.

I am currently using Inkscape for logo designs . I have a XP-Pen Artist 12 Pro drawing tablet with Screen works with inkscape straight out of the box . it’s true that it very different to paint directly on the screen and yes! it helps my workflow a lot.