Ok, thanks…
All I can say, that’s not DPI problem, I edit in 300dpi.
I check with lower DPI, but problem still the same…

Maybe, that’s because of units, in AI I can change units in another system, But don’t know If it still save the xml as default unit or not…!!

All I can say, that’s not DPI problem, I edit in 300dpi.
I check with lower DPI, but problem still the same…

I think we are talking different DPIs

, the svg standard used to be drawing units are 90DPI (Inkscape 0.9.1 and less) it then changed to 96DPI (this being svg drawing units, not display DPI which I think is what the 300 number probably is.) The original Illustrator (which many of the core parts are in) was 72DPI (to match pt) and I don’t know what the latest Illustrator does, (maybe 90DPI against Inkscapes 96?) I have corrected the two connectors (and will check pcb because it is probably wrong too!), you are correct, I must have misread the mechanical drawing because both were wrong. Now I’ll load your breadboard svg and compare something (one of the rectangles probably) between the Illustrator and Inkscape versions and see if I can figure out a scale factor to convert one to the other (I know how to do that in Inkscape if not Illustrator!) so I can scale the connectors that I copied across properly. We are slowly getting where we need to be, and the part is getting better for it

PS: And I just check, on both, selecting same unit… Problem still on…
Because, the unit selection provided for user comfort… But both of the editor save “xml” with their own unit…
And both of the “xml” have lack of units prints after the size, like they are not intended for used on other editor…!!!

Have anybody checked if there are bug reports or improvement requests on the editors?

Actually can’t say it’s a bug, both editor saves their unit in svg xml, in their own way…!!

OK, success at last I think. First the scaling issue, I indeed compared the cpu rectangle between Illustrator and Inkscape: 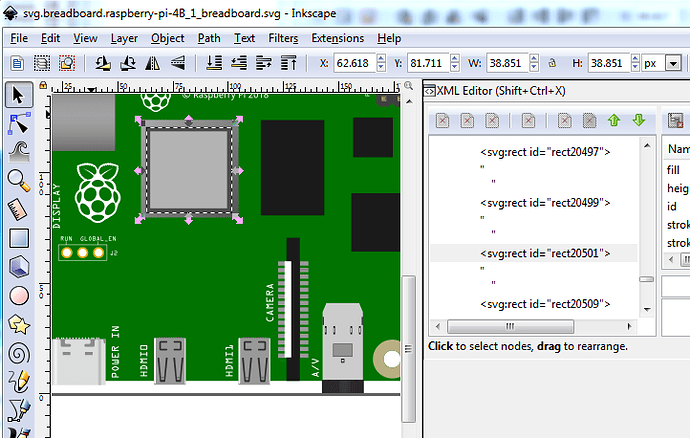 My Inkscape copy of the breadboard svg: 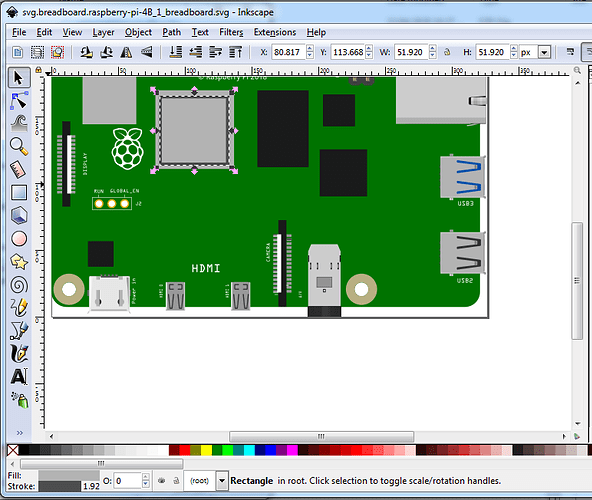 doing the scale calculation (using the widths in px)

and make sure scale stroke is enabled (this may be where your stroke-width problems are, if this is off stroke-width won’t be scaled!) Note the scale (circled in red in the document properties window) because we will need it later (1.0 in this case.) Now change display units from px to pt (i.e. to 72DPI)

the scale changes to 1.33333, so change that back to 1.0 (you may need to do an edit-select all to make sure the entire drawing gets scaled!) then change drawing units back to px. Now the Illustrator svg should be the correct scale in Inkscape:

and our rectangle is now the same size as my original. So with this done, I recopied all the elements you changes (at the correct scale this time

) in to my svg. Then I got out my calipers and measured the size and position of the parts on the real board and adjusted the scale of the various parts as needed, then fixed up my errors in connector positioning in both breadboard and pcb (where the run connector was too low.) That is all reflected in this new part that I hope is now correct:

Hi,
I really like this Raspberry Pi 4 part.
One suggestion for optimizing it:
Could you put a refernce table of GPIO numbers into the graphics? This helps in printed documentations where you cannot hover on a pin for looking up its number. 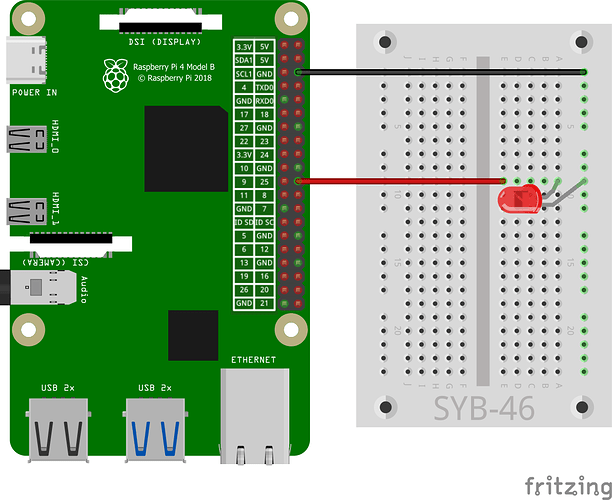 That could be (and perhaps should be) done, but typically breadboard matches the look of the real part (which doesn’t have those markings.) I’ll consider making a variant where the above is done so people can choose their poison (matches real life, or has pin numbers.

I have also written to the Pi foundation if it would be possible to print the numbers on the Pi itself.

Is there a breakout board part for this model of the pi?

I’m not aware of one, but I’m not sure what a breakout board part is in this case. If you have a web site that describes the breakout board I’ll have a look at it.

They call it a pi cobbler. Point is, it can be used with a breadboard and connects to the pi via a ribbon cable. Here is what it looks like: https://www.adafruit.com/product/2029?gclid=CjwKCAjwg4-EBhBwEiwAzYAlsq8llKWm1pZDQf8KjgRykx0xyuWjLSo3LJR3v0KM7q5NvzyKeUbXRxoC6z8QAvD_BwE

The pins need to reflect the Pi 4 model B pins, of course.

They have a part for this in their Fritzng repo. It has a few problems but it works. There is also a couple of modified parts (although they weren’t overly successful) here:

I tried to bring the T-cobbler to the back and the breadboard to the front, but it is still impossible to connect wires from pins near the T-cobbler. Looks like the T-cobbler stays on the top and prevents to start a wire at the pins under or above it. How to solve please? [image]

This is a T cobbler. I want a two-row version that sits along one line like in the link I shared.

While it is easy enough to make one, it has little use that I can see in Fritzing. The Pi4 part will block the use of the breadboard pins anyway in Fritzing (if not in the real world.) As I discovered experimenting with the Tcobbler, there are limitations in Fritzing which make this difficult.

I need one to make a PCB with the cobbler so I don’t need to include the Pi in my PCB design. T-cobbler will sit wrongly on the PCB.

Ah! Then this part may be what you need.

Here is a new update for this part. The change is all in pcb, the pads are now smaller so you can stack these and run standard 24mil traces between pins and have it pass the default DRC rules. [Capture] and the new part. I have a set of boards using this layout coming, so I can make sure the pads work in practice. Assuming they do I will change the RPI-4B to use this and then add this as an option to the parts factory for making headers. Raspberry-Pi-Header-40pin-improved.fzpz (14.8 KB) I ha…

Hi. Anyone have maker pHat diagram for raspberry pi 4? It looks like this. I cannot seem to find it in fritzing.

This should do what you want. There is no pcb view as it isn’t useful.