I created a circuit with a NodeMCU board and a few other parts. This is my first custom PCB. I built it 100% with Fritzing, then sent it off to OSH Park for creation of the PCB via Gerber. For some reason the contacts for the NodeMCU were not drilled, and I just have copper pads on either side of the board. No thru holes at all. Everything else looks right.

I would love some guidance on how to fix this without having to submit another $100+ order.

Welcome aboard! The likely answer is the node MCU part is not correct. If you would upload the sketch (the .fzz file, upload, is the 7th icon from the left in the reply menu) I will have a look. For future reference, you should export the gerber files (which you must have done to make the boards) then check them with a gerber viewer (I use gerbv, but there are lots of them.) That would likely have shown the lack of holes on the node mcu.

Attached. Thank you in advance for the help!

As I expected, your node mcu part is misconfigured. The pads are ellipses which causes the gerber code to not drill holes: 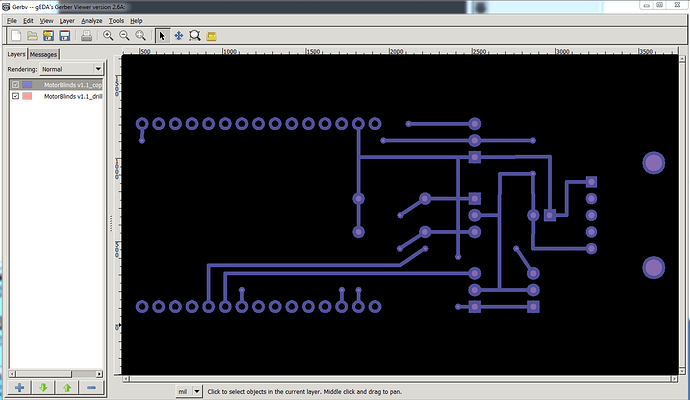 This is the gerber output of your sketch in gerbv with copper bottom and drill layers loaded. Note the pads outside the node mcu have a lighter circle (which indicates a drill hole) that is missing in all the node mcu pads. That is caused by this in the pcb svg file (loaded in Inkscape): 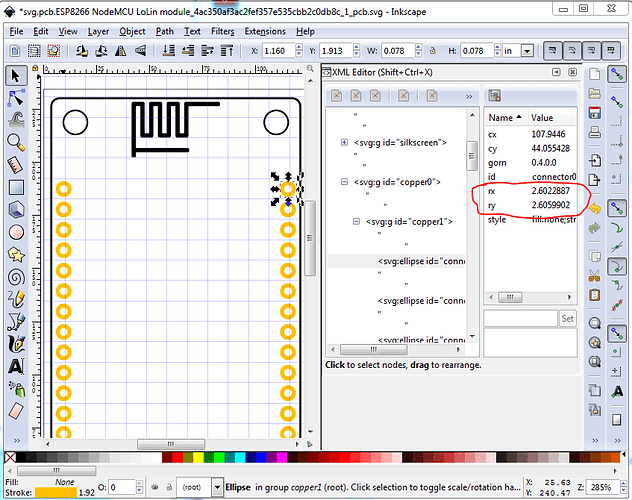 The rx and ry circled in red on the right should be a single r with a value of 2.6 to make a hole. So for this fixed part I changed all those from rx/ry to r 2.6 which causes the new part to drill the holes correctly: 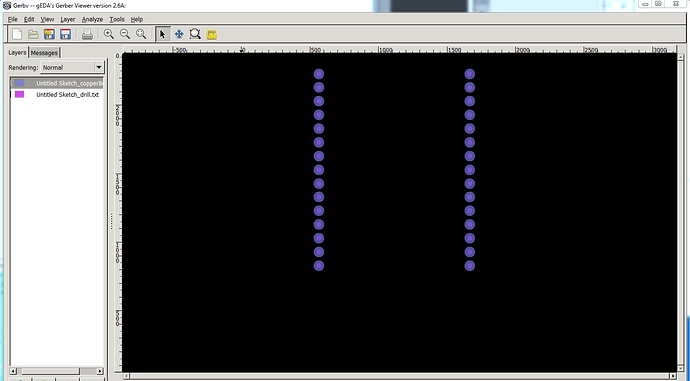 again gerbv output with copper bottom and drill layers (but only the node mcu.) This is the part you need:

It has the same moduleId as the current part, so in your sketch you will need to do a “delete minus” on the node mcu part which does this: 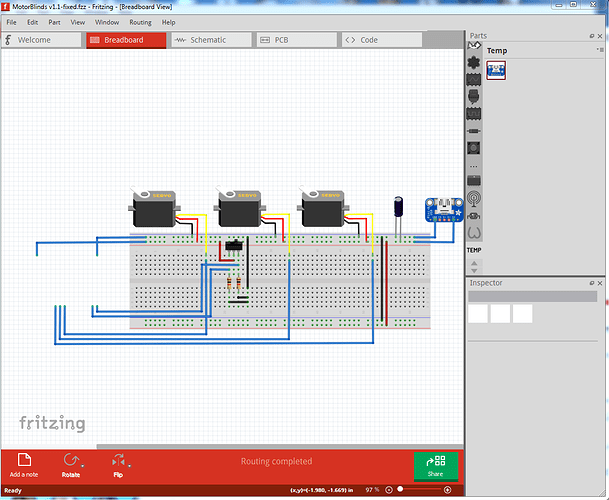 deletes the part but leaves the traces in place. At this point I saved the .fzz file because sometimes Fritzing doesn’t correctly remove the part completely and won’t load the new part. I opened it again and loaded the new part (which is now in the mine parts bin.) In this sketch that is all that has been done (so if you wish you can try the rest of this to learn how to do it):

Starting from here I moved the new part in to position on breadboard (rotating it to get it aligned correctly): 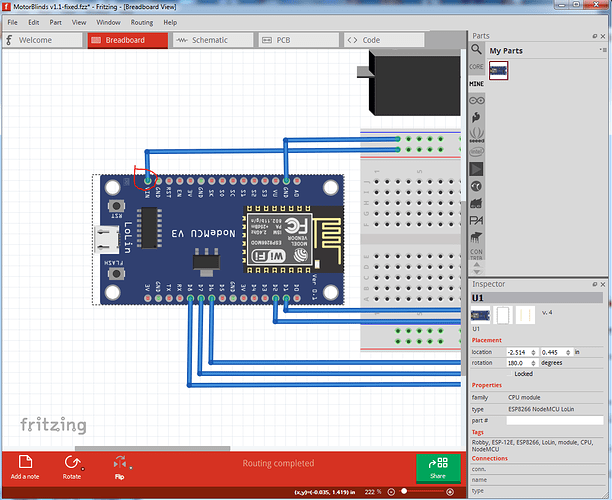 unusually for me (this is usually difficult) the part connected as it should as indicated by the green (connected, as opposed to a red not connected) circle in each connection. To achieve that you need to move either the part or the wire a bit so that Fritzing makes the connection. So breadboard is done. Now on to pcb. 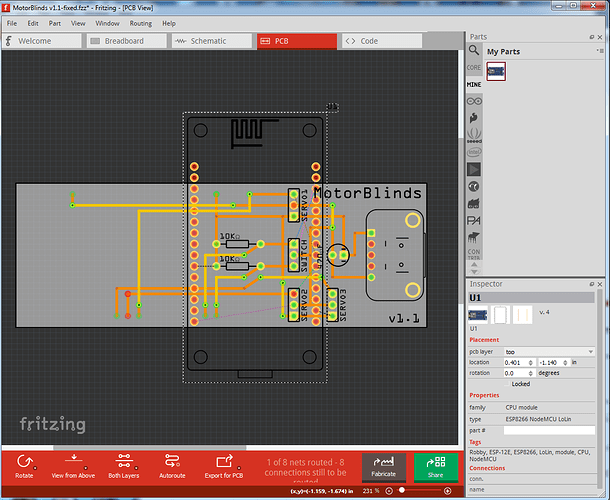 Here again the part needs to be rotated and moved to the correct position: 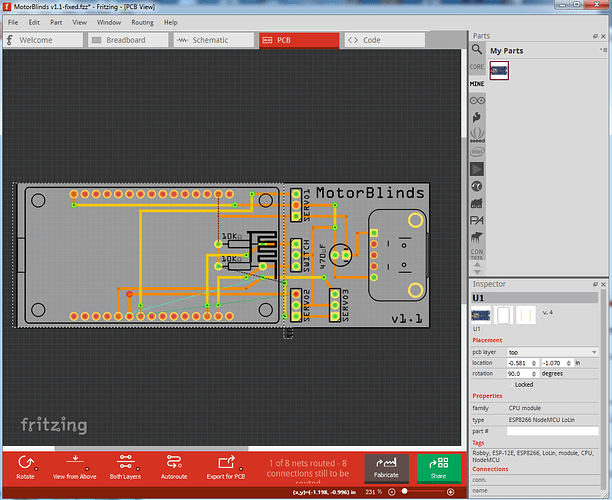 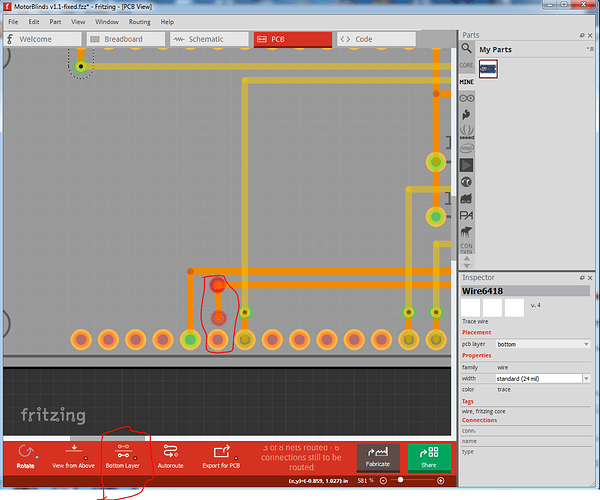 Here I have moved a couple of traces (green circles) to reconnect them and dragged one trace back a bit (circled in red) to indicate how to drag it down to the connection to make the connection. 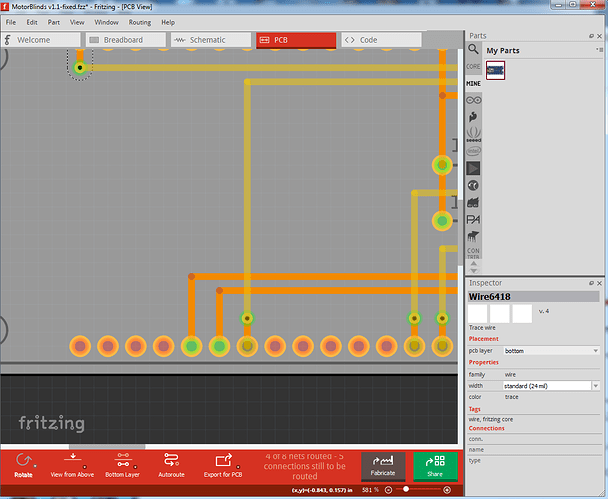 After re making all the connections (as indicated by the routing complete message at the bottom of the screen.) 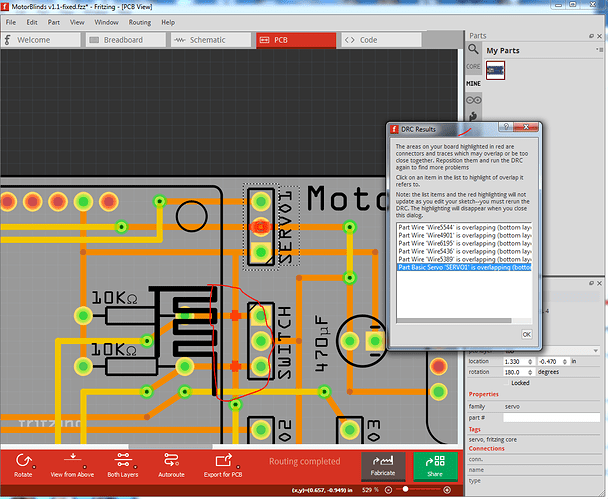 I ran DRC (Routing->Design rules check) which points out several problems: the trace circled in red is shorting the two connections of the switch (which breadboard indicates shouldn’t be shorted.) It is also unhappy about the trace going through the middle pin of the servo, assuming it should be connected that way, the correct method is for the left side trace to terminate at the servo pad and the right side trace connect from the servo pad to the next connection.

WOW! This is a fantastic write-up! Thank you so much for not only helping me with my problem, but taking the time to provide a full write-up! Please know that it is greatly appreciated.