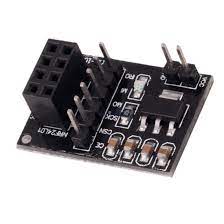 hello, I need this part for fritzing please help!

Welcome aboard! To my surprise we don’t appear to have one of these. A google search for “fritzing part nrf24l01 adapter module” doesn’t turn up anything appropriate. That may be because an Nrf24l01 will do in its place (the Nrf24101 is available in core parts.) To make a custom part we would need either a mechanical drawing of the board or at least a web site like this one with enough information to make one.

As you know nrf24l01 need a 10-47uf capacitor between gnd and vcc so I use it ,and ther is some capacitor and resistor but I don’t know connections .And I am afraid of I haven’t got enough time,it is for a competition can you send .fzp file?

This should do what you want. It has a NRF24L01 attached to the connector but the interface is out the adapter board pins as in real life. There is no pcb view as it isn’t useful. 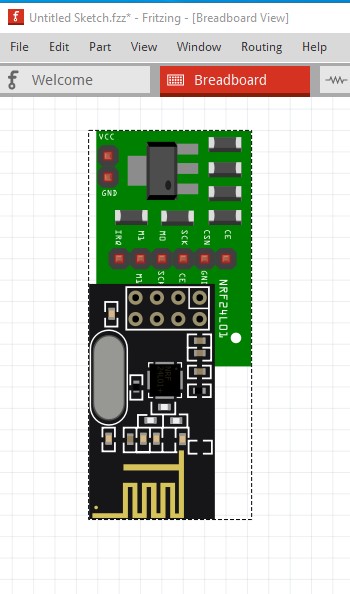 Thanks for your part.I try make pcb color black(and add a sma socket),but in fritzing it is look green?

You have been bitten by an Inkscape/Fritzing incompatibility (and there are a number of other problems.) 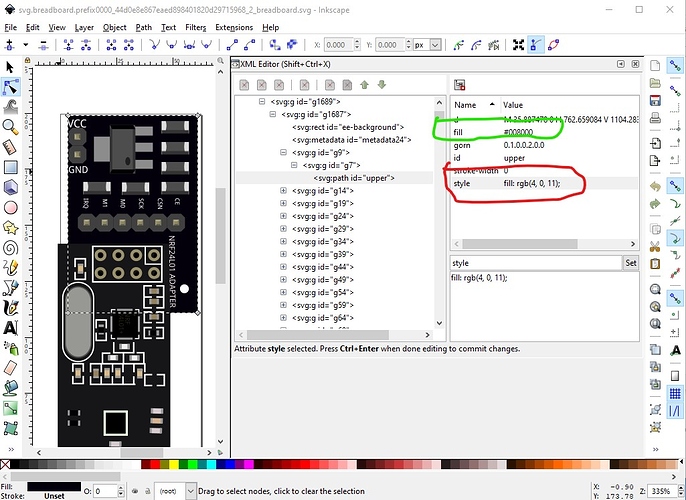 The color problem is that Fritzing is using the fill (green) in the fill attribute (circled in green on the right) Inkscape is using the style command value (black) circled in red on the right. The best cure (and what I did) is run the finished part through FritzingCheckPart.py which is available here:

among other things, it deletes inline parameters like the fill and moves the values in the style command to inline xml (because in some cases, Fritzing does not support style commands!) so both Inkscape and Fritzing are using the same parameters and thus what you see in Inkscape is what you see in Fritzing. Then I noticed the view box is too large because there is an unused path way to the side of the part, so I deleted that to reduce the size of the viewbox to only the part, as it should be. 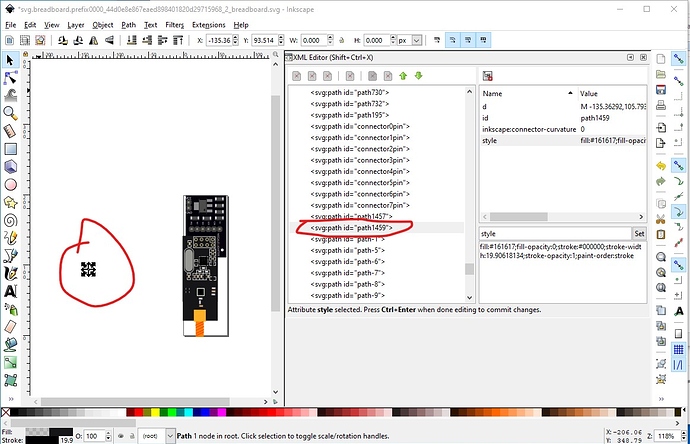 Next the view box doesn’t start at 0 0 (which will cause grid offset issues in Fritzing) so in Inkscape do Edit->select all then Edit->resize page to selection to correct that. 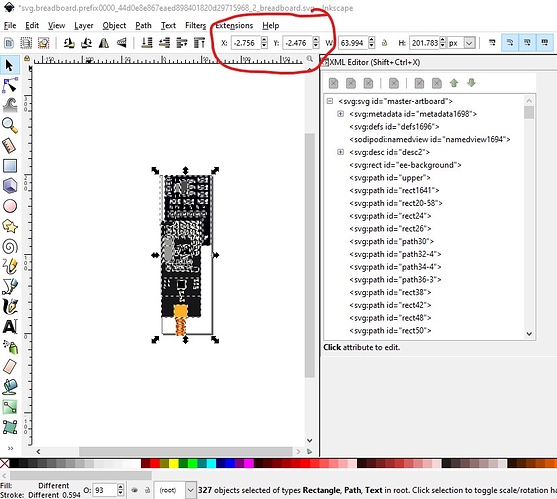 As well the svg is missing the breadboard layerId (which will cause the part to not export as an image) so click Object->group to group the entire image and name the group breadboard. Next FritzingCheckPart.py warned that the drawing is dimensioned in px rather than inches which can (and does in this case!) cause scaling problems. 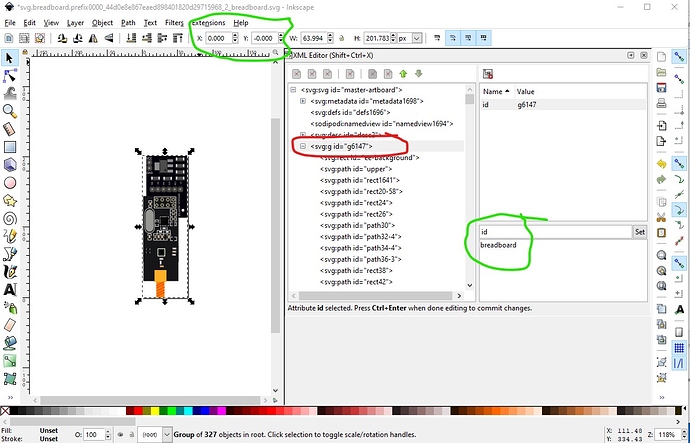 In this case this didn’t help, because the drawing is in a different dpi than my copy of Inkscape as we will see later but this is how the drawing should be dimensioned. 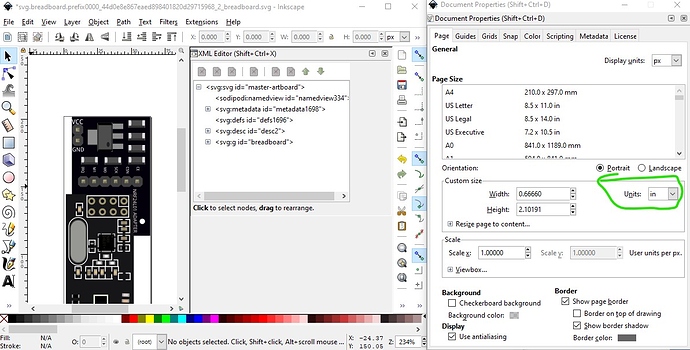 When I saved this breadboard svg, and made a part from it and loaded it in to Fritzing we see the scaling problem. 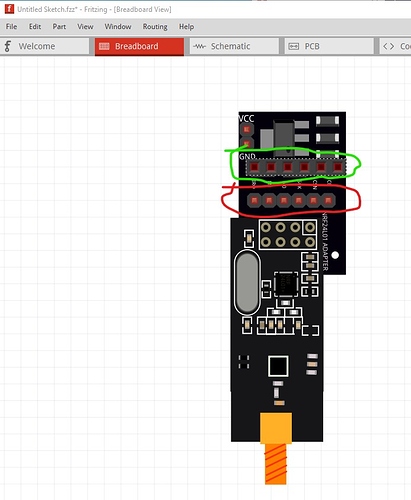 The top connector is a 6pin header dragged in the the sketch from core parts (circled in green) that is correctly aligned on the .1in boundaries. As we see the connector in the part (circled in red) is shorter indicating its scale is incorrect. To fix this I first selected connector1pin whose x coord is 0.219in then selected connector0pin whose x coord is 0.136in (and should be 0.119in to be on a 0.1in boundary.) That means the drawing needs to increase in scale by 120.4819277108434% to make the pins be on 0.1in boundaries. To do that set Inkscape like this: 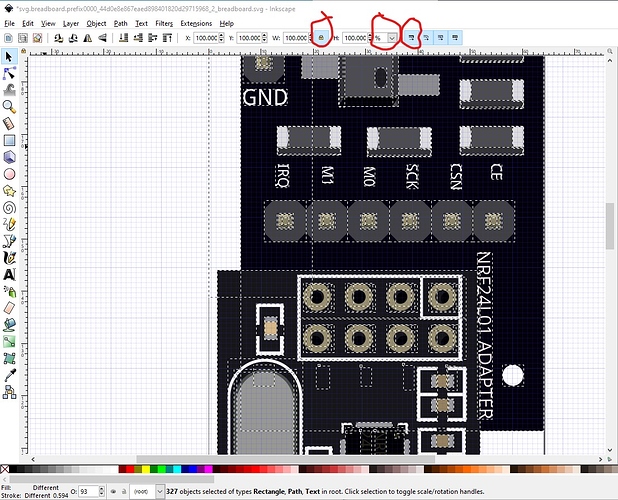 lock height and width to scale together, change dimensions to percent (all are at present 100%) and enable scale stroke width when scaling (all circled in red above.) Now change the width to
120.4819277108434% 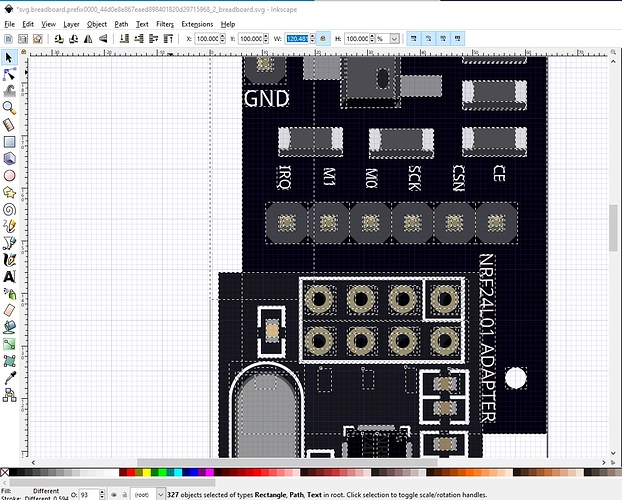 which rescales the drawing so the pins are on .1 in boundaries 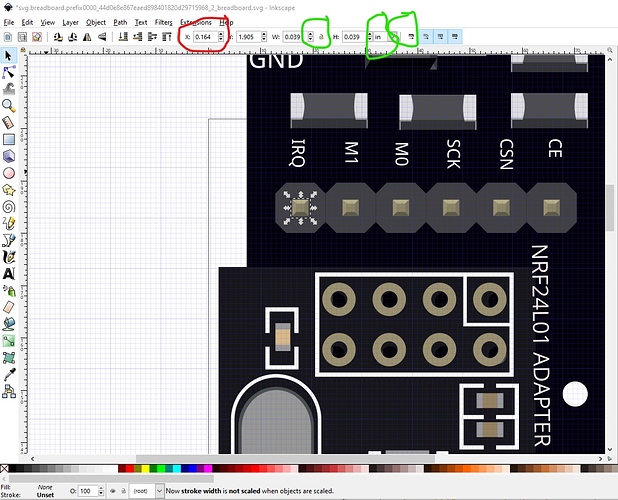 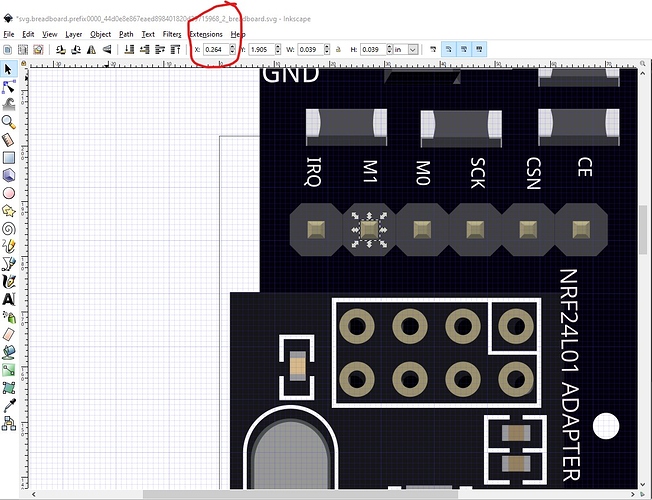 and connector1pin is now 0.264in in x as desired. However because of the rescale, the viewbox is now too small 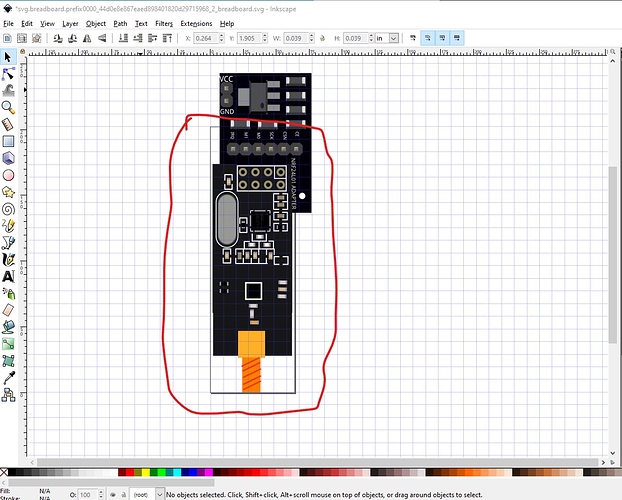 so do Edit->select all, Edit->resize page to selection and then Object->group and rename the group to breadboard to create a correctly scaled svg with the layerId and save it as plain svg. 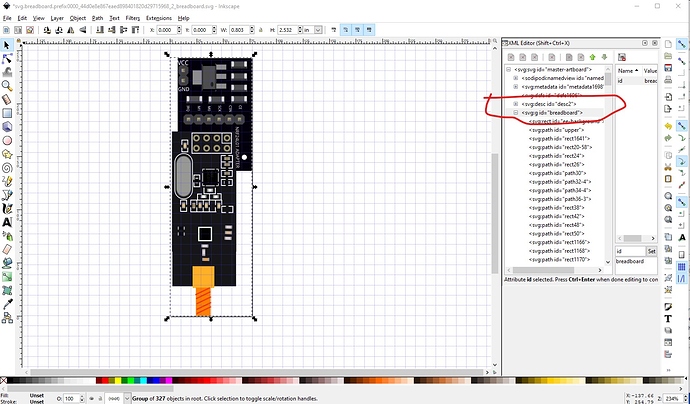 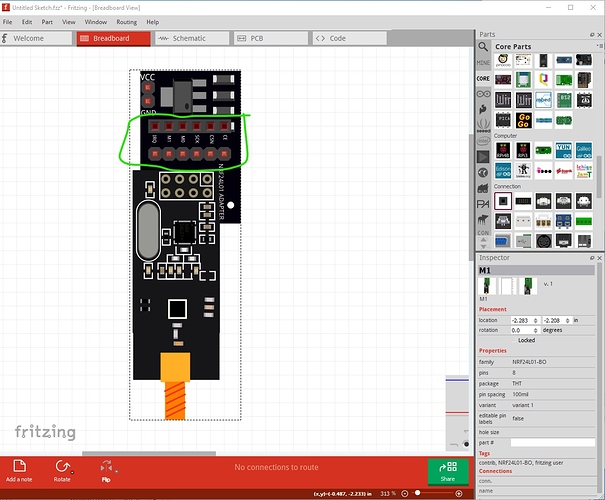 Then you need to see if it will let you control the parameters of the svg as Inkscape does. From the documentation (I don’t have Illustrator), I can’t see a way to do this in Illustrator they seem to believe they know best on the svg parameters which can be a problem. Inkscape has its faults, but it is free and flexible enough to do what Fritzing needs. Good luck!