Here are two parts for the Arduino NANO pr2040 CONNECT that @jorgechacblogspot asked for (in an unrelated thread.) There are two parts, although only the tht variant is likely useful at present as they don’t appear to be selling the no headers version so far. If they start selling a no headers version the SMD variant would allow you to solder the module to your board (as would unsoldering the headers …)

edit updated to add the bar above reset in schematic on both boards.

the difference is that in the SMD part pcb has pads for soldering to the pads on the module and you can put them on both sides of the board. The THT version has holes for .1 connectors which are mounted on the module currently being sold. 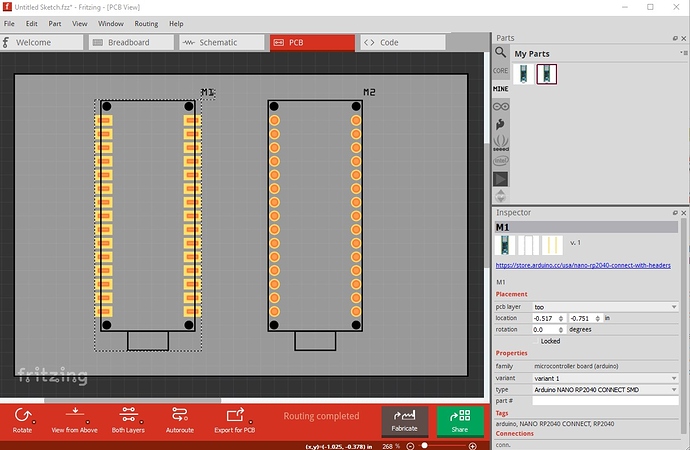 thanks, by the way I tried to find the fritzing part Arduino Nano 33 IoT but they only have it on this site, where by the way the fzpz file is sold for € 2.45:

There is a free part available on the Arduino site linked from the product page but it has a variety of problems. Here is a corrected version along with an smd version. I’ll leave a pointer on the Arduino site to this post in case they want to update and take the rp2040 part.

OK, here are two new parts with the changes made. You folks will want the tht version, as it has both holes for .1in headers and pads to allow soldering the module to the top of the board. As well the holes for the USB connector are automatically drilled and the pcb silkscreen has the keepout areas specified. Schematic has the ground pins consolidated on a single ground pin at the bottom. Raspberry-Pi-Pico-tht.fzpz (23.1 KB) I`ll leave the SMD part here in case anyone wants a real SMD part lat…