Hello everyone.
I made a RobotDyn BlackPill.
How about it?

It looks great, and Breadboard view works fine.
If I connect a resistor on the Breadboard, it shows fine in PCB, as in the screenshot

But if I connect something (C1) to any PIN in PCB view, it is always connected to the center,
which seems to be SCK in the other views. 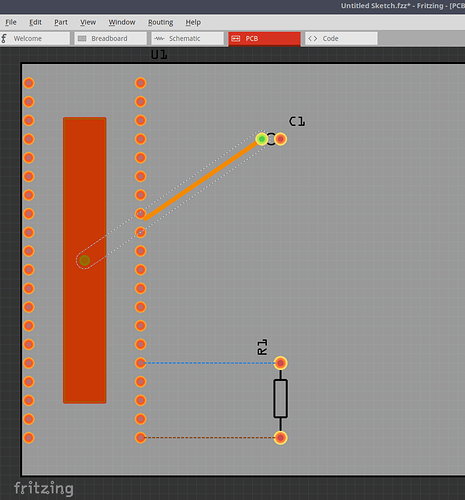 While attempting to fix this on your own is a laudable goal, it likely isn’t too practical because parts creation is mostly undocumented (I’m trying to change that, but it is slow going.) The usual way (and the way I learned to make parts) is to ask for help in here. We (which has mostly come down to I, because those I learned from are no longer posting here) don’t mind helping people learn to make parts because we all benefit from new parts. That said your part is mostly pretty good, it has a number of problems, but with a few of them fixed it works. I then took your part and modified it to the point where it could be submitted to core parts. While doing that I fixed your original part up enough that it now works in pcb. The red rectangle in the image Kjell posted above is because connector49 and connector50 are connector49pin in the fzp file but connector49pad in the pcb svg file. Thus the connector effectively does not exist in pcb, and the red rectangle appears. There were also some grouping problems (connectors not in the copper group, and copper1 was missing). With those corrected we get this: 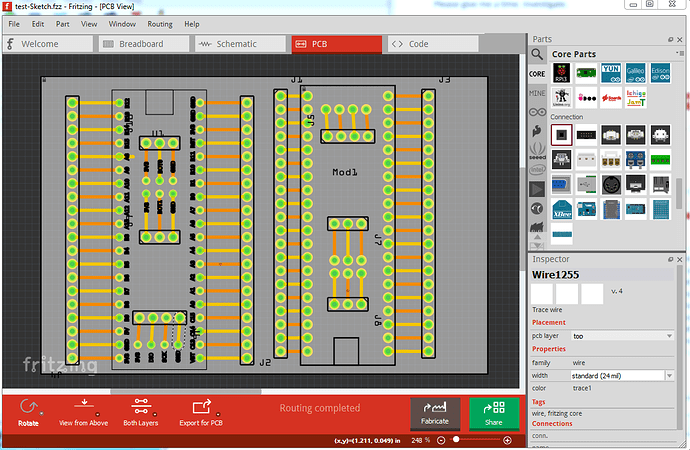 Looks OK here but looks are deceiving. The gerber drill file indicates the holes are all 0.028137in rather than the correct 0.038in for a .1in header pin to fit.

You will also note my copy has no text in pcb view. This is the normal convention. If the user wants text there, it can be added to the sketch, if it is in the part, to remove the text you need make a new part without the text. Leaving the text out of pcb is the most flexible for the user. Schematic works but has some problems. It is not on .1 boundaries and lacks terminalIds. The lack of terminalIds causes the wire to connect to the center of the pin rather than the correct action of connecting at the end of the pin as in my part on the left" 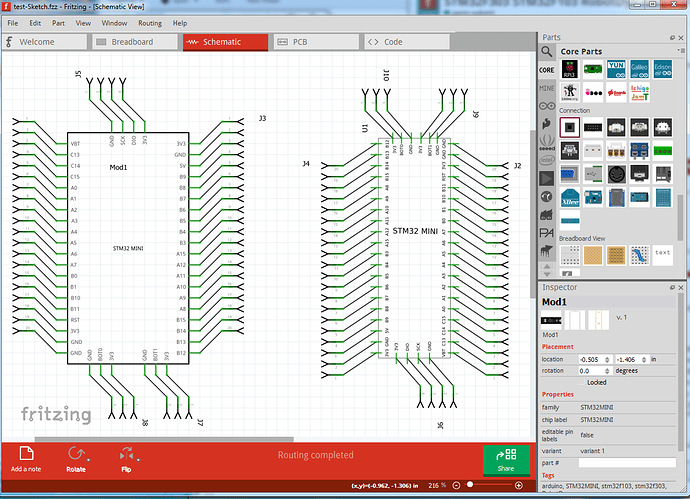 The connections are routed at a 45 degree angle so it is obvious if the terminalId is not correctly placed. Here is a copy of my corrected part, which has a new moduleId and thus (as we see here) will load along side your original part. The original part that I modified enough to work in pcb will be in the temp parts bin when the fzz file below is loaded. You can edit it with parts editor, and save as a new part to get a copy that will load beside your original part so see what I did. In the new part schematic is completely new, I used the simple template from, this tutorial to make it:

This is a Fritzing schematic template file for use when you want to make a schematic svg from scratch (which I usually do as I find it easiest). It is set to the proper scale as explained in this howto https://forum.fritzing.org/t/rescale-a-svg-using-inkscape/7581\ and the fonts, font sizes and colors match those called for in the graphics standards here: http://fritzing.org/fritzings-graphic-standards/ This simple one has connectors with terminalIds and labels on all 4 sides of the rectangl…

I also rescaled all the svgs (the procedure is referenced in the template posting.) As noted if you have questions feel free to ask in here. Here is a copy of the improved part (it too will be in the temp bin of the fzz file but this is easier to get at):

and then a copy of the test sketch:

vanepps
Thank you very much.
I was impressed.

As a result of the amateur’s hands, it has caused you trouble. I’m sorry.

We will continue to use this site in the future.

As a result of the amateur’s hands, it has caused you trouble. I’m sorry.

Not trouble, as I said this how I learned to make parts from those who know more than I do. I’m just passing their help onwards. We all gain when more people make parts.