I’ve split up my schematic diagram into several “functional” pieces (using net labels) and projects. I use one project per board.

Today I would like to reuse the schematic diagrams from these projects to create a new board, with its own pcb layout, without copy-paste the diagram pieces but more like importing them.

Are there any solution to do this ?

I assume that what you want to do is treat an existing sketch (or at least the schematic view of it) like a module (or a part) in the new sketch. I do not think the Fritzing has any way to directly do that. If all you want is the ‘picture’ of the sketch (no moving parts or wires around, no connections), then you could save the schematic view from the existing sketch (as image), then load it as a schematic image in the new sketch. If needed, you could add some dummy header parts to provide connection points.

Yes you understand well. I would like these sub-schema as kind of modules.

I’m looking at the fz file and have the same kind of conclusion. Each component is taken as a unit with coordinates in each view.

So the best we can do is to make parts from these functional diagrams, but the PCB layout is going to be “very fun”, with nice designed areas and a mess to connect them… Without PCB shape constraints it can work (not my case).

If you upload an example of what you mean by a “module” as a Fritzing sketch, we may be able to suggest a workaround (or perhaps not because Fritizing has lots of limitations!)

I don’t know if it’s a Fritzing limitation, this would requires to have a more complete view of the software market and to be more experimented in electronic design. My experience is more on software design where we love to reuse, to version things.

Thanks a lot for also having a look.

In my project I have fifteen “modules” in actually 3 sketches. These PCB are installed in two DIN rail boxes.
Now I would like to have a second edition of this electronic in one single box (Wall mounted), so with another PCB layout. I also need to maintain this electronic (fix issues, enrich…) and obviously to do it once only.

Here is an example with two of those modules: 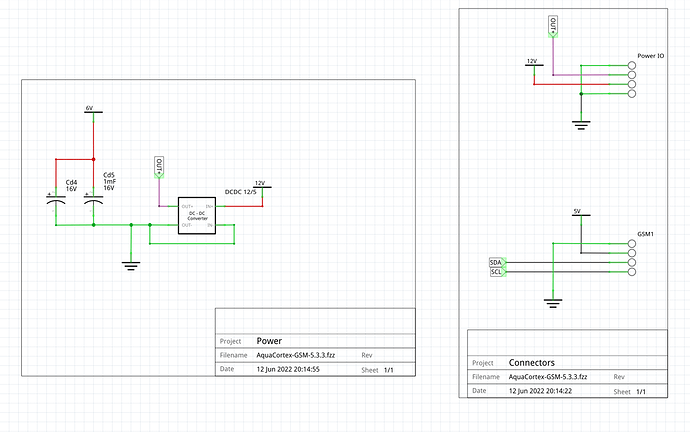 For a first scenario (DIN Rail boxes), these two modules are part of the same PCB.
For the second scenario (one single box), I won’t need the second one in this image (that’s the connectors I need between DIN rail boxes).

I think there probably isn’t a current Fritzing solution because Fritzing was meant to be simple and sketches don’t usually interact. I was thinking that you could turn the modules in to parts, but I don’t think that will work because there isn’t the concept (AFAIK) of a netlabel in a part only in a sketch. I see (I think!) what you want to do, be able to change one module and have everything else that uses it automatically update, but at present I don’t think that is possible (and it will have update issues if connections change which would make it very complicated to implement I expect.)