So I’ve been working on my own project to control my door with my Pi.

With a lot of thanks to people on this forum I should say!

It’s mostly there now (I hope).

I’ve made a couple of connector parts that seem to be quite accurate.

The problem I face now is that as per @vanepp advice I’m using ‘thin’ (16mil) traces to get around the raspberry pi header. I found though it still needed a bit of help, so I want to extend the height of the PCB so that traces can go on all sides of the header itself, but I don’t know how to extend the PCB size - it seems locked.

Secondly the DRC brings up a whole load of errors, which I’m mythed by on account that it was the autoroute wizzard that did the routing.

I’m honestly at a loss as to why the autorouting (all be it with ‘thin’ traces) should collide as the DRC claims.

Could someone have a look for me please? If you neaten up the PCB traces too that would be absolutely epic!

Thanks very much indeed.

I’m truly excited to have my first PCB fabricated soon!

Oh, also the strike, bell and 12v-5v may take more than a thin trace can handle, so the path from the DC jack to them may need to be increased, I’ll run the number on that now to be sure.

Looking at Aisler’s site the trace thickness is 43microns, so a thin (16mil) trace is good only for 1.42A, so what’s the best trace technique to ensure the 12v-5v get’s a big enough trace, and that the root trace to the more power hungry parts is big enough for the full demand?

Is there a good, workable way for me to ensure the higher

It looks like you have not positioned the hole parts correctly. They are not lining up with the marks on the pcb image, and the bottom ones are overlapping the edge. Possibly because the PCB was moved after the holes were placed. Once something is where you want it to stay, lock the part to prevent it from accidentally be moved while working on the rest. It looks like you locked the holes, but not the PCB.

Autorouting does not do DRC, so it may not leave the needed clearance. You need to adjust the trace positions after autorouting. That is normally small tweaks going around corners, and sometimes moving out a little from a row of connections. Anytime I use autorouting, I do a full cleanup of the results. To straighten unneeded zig zags, remove extra vias, adjust via positions to allow more traces to be straightened, change some obvious clumsy routes. The more you can (correctly) manually route first, the better autoroute works.

Any individual trace can have the width adjusted. You can select an autorouted trace, then change the width in inspector, or you could route specific traces manually, with the needed width, before autorouting. Any existing trace can be marked as “Do not autoroute”, (including previously autorouted traces) so autorouting will leave it alone, and work around it. May need to adjust trace positions to compensate for increased size of the specific traces. For this, I would start by using (extra) thick traces for ground across the bottom (all bottom layer), and extra thick traces for the 12V across the bottom (all top layer), mark them as do not autoroute, then run autoroute again.

You can also effectively increase the ground connection trace sizes using ground fill. After manual or automatic routing is finished.

It looks like you are using a custom image for the PCB. The image used for that will need to be modified to add the room above the header pin rows.

You probably do not need the extra space. It looks like you only need it for the one trace. That should be able to be routed differently, to not use that outer path. Probably with an extra via or 3.

You could make the breadboard view easier to follow. You did a good job of routing the wires (though parts could be simplified), but adjusting some of the wire colors could improve it. For starters, change all of the ground wires to black, and all of the power wires to red. Maybe each of the different voltages to different colors instead. That done, change some of the middle wires in the groups to different colors, to make it easier to keep track of which wire is being followed.

I would have started with the schematic view, which you have not used. Looking at the breadboard view, I am not SURE that various voltage rails are connecting where they are supposed to.

Here is a copy of the sketch with the mounting holes moved, suggested manual routing of the ground and 12v traces, and autorouting. No cleanup has been done after that. I marked up a screenshot to show some of the places that cleanup can be done.

More would be possible. Doing some of the alternate routing traces manually, marking them as do not autoroute, and rerunning autoroute might get some of the other things cleaned up (for free). This is an iterative process. Clean some of the more obvious pieces up, and see that it looks like. 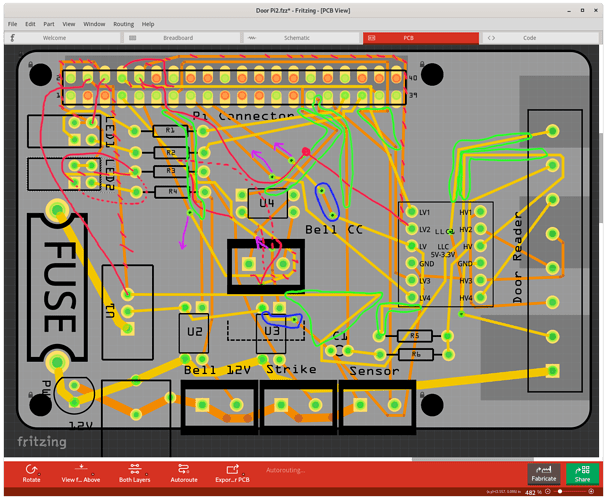