Hey guys, I am looking for someone who has the updated version of the Arduino Yun (Rev 2) - schematic and PCB wise. Currently the only one available to be used on Fritzing is the first Arduino Yun release which had some weird connections that are not valid for the Arduino Yun Rev 2.

Thank you in advance.

It is easy enough (for me at least) to make an update, but there aren’t a lot of changes in pcb. The ICSP connector is missing in the Fritzing part, but pretty much all the other connectors are there. The unofficial pinout shows POE connectors, but they don’t appear in the Eagle files from Arduino nor on the picture of the Yun V2 in the Arduino store. Are the POE connectors what you are interested in? The Fritzing schematic does appear to be missing some pins though.

Hey, I really appreciate your dedication, but I managed to sort myself out with the older version. It’s all good from my side, but thank you!

I’ll probably continue with the update anyway, it needs to be done eventually, may as well be now since I have the eagle files processed. It looks like the POE connectors were on the original but not on the new one.

I am sure it will be helpful to a lot of people (including me), thank you for spending the time.

Working on development was particularly frustrating today, so here is a part (unlike development I can successfully make parts

.) I think the original Yun may be broken, it appears to have a lot more buses than are needed in this version. Schematic matches the layout of breadboard because I find that layout more useful when debugging. Feel free to comment if you don’t like it, because my long term goal is to fix up all the parts in core moving to this schematic format (assuming there isn’t opposition.) The new one is on the left and the original (like the rest of the arduinos) on the right.

replace with one without a typo in the label …

I find it easier when schematic matches the layout of breadboard. For most EDA packages there isn’t a breadboard view so it doesn’t matter, but here we have breadboard view and I find this much better. And the new part. As usual the mounting holes in pcb aren’t drilled they are only on silkscreen. If you want holes you need to drag in a hole and place it over the hole in silkscreen to get it drilled.

Edit: second try, correct the ICSP SCK label as well as the typo … 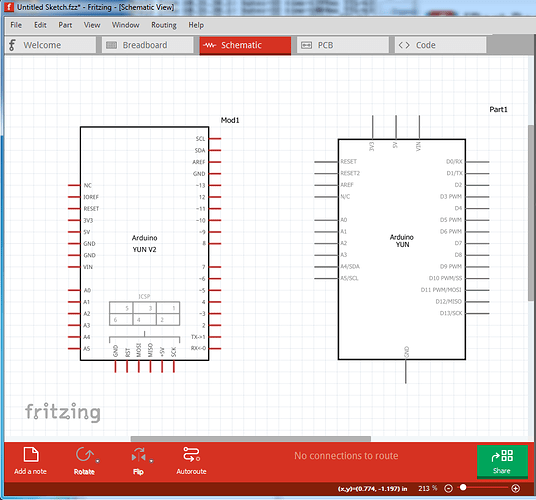 edit: and a part without the typo in the schematic label (and again with one the has the ICSP SCK label in the correct place …)

It is looking way better than what it was before, just be careful with the typo there in “YUM”. Thank you so much for your effort.

Good catch, thanks! I’ll correct that and re upload.