I never made a part for Fritzing before so probably there are a lot of thing wrong on this one.
Eitherway there wasn’t a Fritzing part that I could find so I made one.

This is a part for the Pi Supply PaPiRus ePaper / eInk Screen HAT for Raspberry Pi.

If anyone could help me to make it better, please let me know. 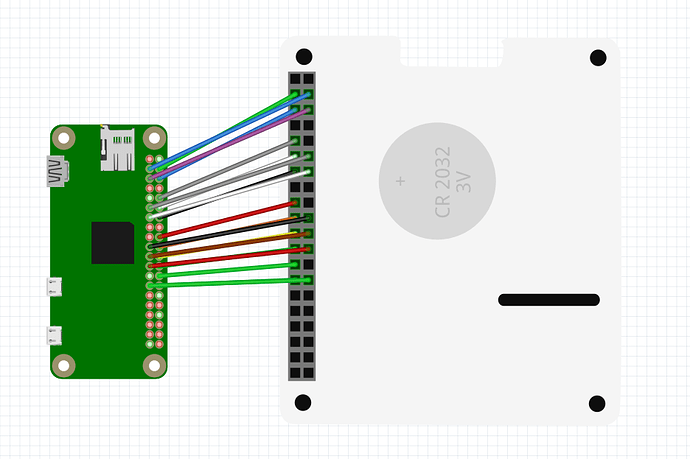 Off the top, the " in the file name breaks the part on Windows (the " is illegal in a file name). Your part is missing schematic view (it is a copy of breadboard which is non standard). I have found a listing of the pin numbers in the assembly guide which should make a proper schematic possible. The product web site claims to have a schematic and other documents but the links 404. I’ll poke at it a bit more and create a proper schematic and clean up any other problems I find.

Thanks for the reply Peter.

They do have some datasheets on their Github account maybe that would help?
Or is it this schematic you’re looking for?

I tried to use that as a reference and drawed it in Inkscape but for some reason Fritzing didn’t accept it.

The file name is an easy one to fix (and added as attachment here).PaPiRus 2.7 eInk Display HAT.fzpz (8.3 KB)

That unfortunatly is the easy fix

, more of a problem is the scaling issues. Both breadboard (scaled too large) and pcb (scaled too small) are broken. In the end I cloned both from the PI3 part to get the mounting hole spacing correct and cut and paste in breadboard to get a suitable connector (the pi3 one is male rather than female) then added a proper schematic by starting from a 40 pin IC and adapting. I’m just finishing up some editing to the fzp file to make the pins contiguous and starting at 0, then I’ll post a new version with an explaination of what I did. You may want to fix up the board outlines because I haven’t learned how to edit (or for that matter create) complex paths so I changed the pcb silkscreen to non rounded corners and deleted the path. This is a good job for a first part, you have mostly hit undocumented (or at least poorly documented) gotchas. The outline drawing will be helpful as well, there does seem to be documentation around, its just not easy to find

Edit: OK, done. Here is how I would create this part. Feel free to use as much or as little of it as you choose. As noted above this is basically a complete rework starting from the Raspberry PI 3 part (to get the mounting hole spacings). Note that as is fairly usual for Fritzing parts the mounting holes in pcb are only on the silkscreen layer at present. If you want the holes in the pcb to be drilled you need to drag a hole (from the parts pcb menu) over the position of the hole on silkscreen or modify the pcb svg to add 4 nonconn circles to always drill the mounting holes.
Also of note is the connector layout in breadboard is from the back of the screen (as that is how you would connect it in breadboard), where as in pcb it from the top as if the screen was plugged in to the pcb (and thus the pin numbers are swapped left to right from breadboard). As noted schematic was created new from a 40 pin generic IC and renumbered and labeled (where the PaPiRus didn’t have pin designations I used those from the pi3 GPIO listing). In the fzp file I added entries for all pins and rebased it so pin 1 is connector0 (this is a Fritzing oddity, I think to do with C arrays starting at 0) and containing all the pins, as the descriptions provided when you hover above a pin screw up it the pins are not continuous. As noted the board cutouts aren’t identical to the drawings because I don’t know how to make them as paths. You may wish to fix that up. If you have questions about what or why I did something, please ask, since I want to encourage people to make new good parts and you seem to be mostly there now. I should add that I also cheated in a way you currently can’t by post processing the Inkscape output with a python script to fix several incompatability issues between Inkscape and Fritzing mostlly CSS related which Fritzing doesn’t support fully (remove px from font size and inline style commands mostly as well as check syntax). Once the script works mostly correctly I’ll release it but it still has a few bugs to fix at present.

Hi Peter,
Thanks for the elaborated reply. I have some trouble to import your version because that part already exists in my library. If I have some time tomorrow I will take a look how I can fix that and improve the model. Thanks for your work!

Easy for me to fix probably less so for you as you would need to delete your original part. Here is the same file exported as a new part which should load alongside your original: