Have you see this before?

This appears to be an issue with single layer PCB.

The best bet would be to upload the sketch (the .fzz file, upload is the 7th icon from the left in the reply menu) and one of us will have a look. Assuming you were using autorouter it usually doesn’t work very well and you are better to manually route though.

Autorouter appears to be broken (I am using Fritzing 0.9.9.) It also appears to have changed some (there were some fixes a version or two ago) which may make things worse. So first I re aligned schematic a bit to make sure it looked correct (which it appears to be) because if it is incorrect that will reflect in to pcb. 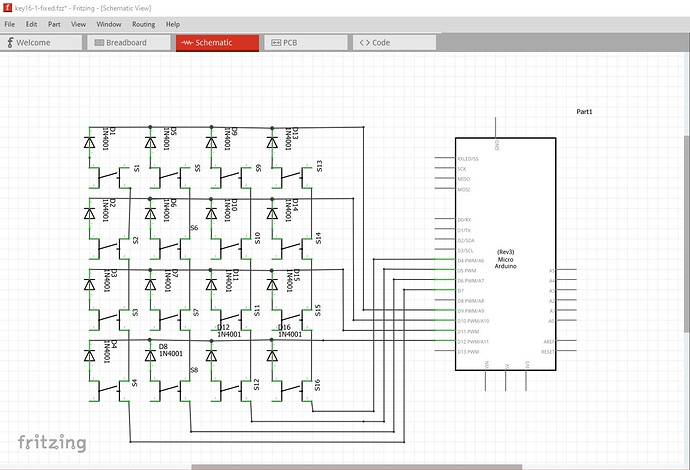 then in pcb I did Routing->Select all traces 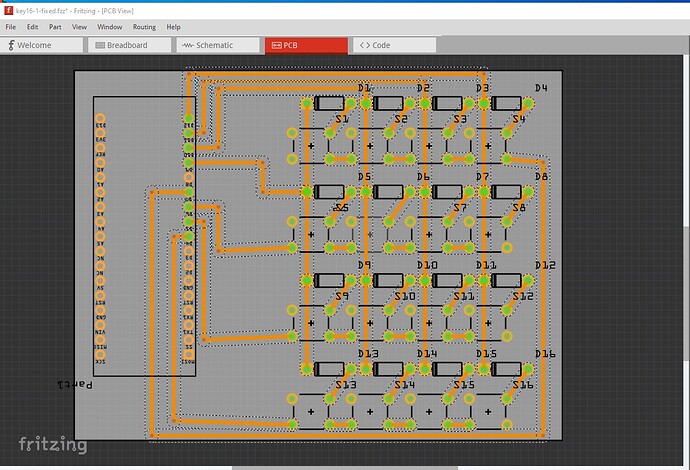 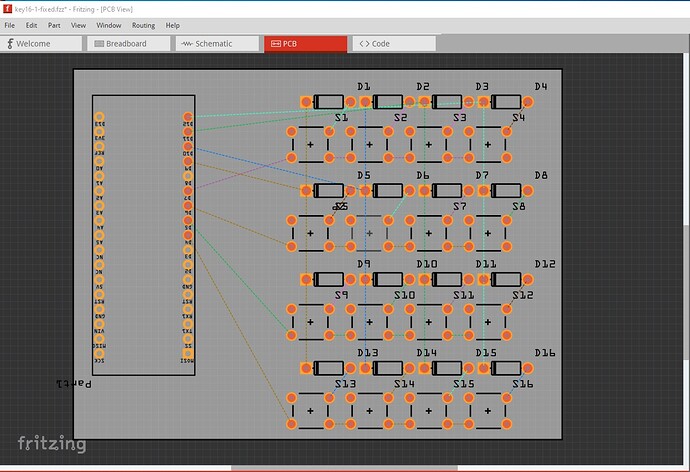 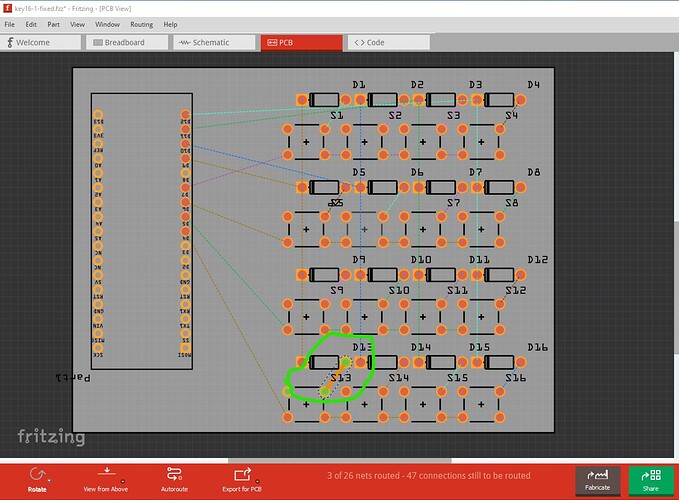 first do all the traces that don’t overlap, then consider how to route the ones that will overlap. In the end to do that I needed to reduce the grid size from 0.1in to 0.05in by clicking Routing->Set grid size and changing it from 0.1 to 0.05 and clicking OK 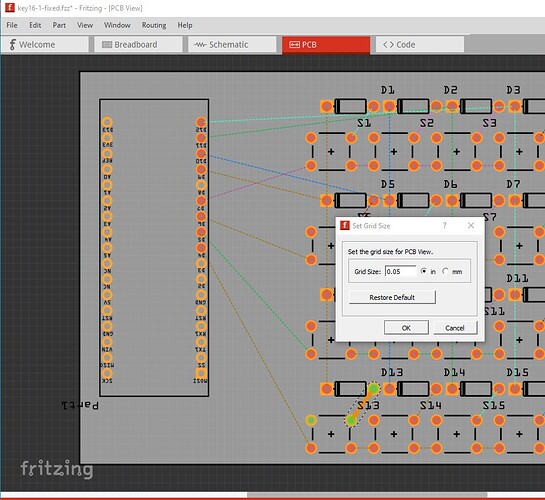 that allows me to route it (without any jumpers) like this. Note the 0.05in grid size was needed to keep the top 3 traces circled in red in the bounds of the pcb. If you can increase the size of the pcb you don’t need the reduced grid size. 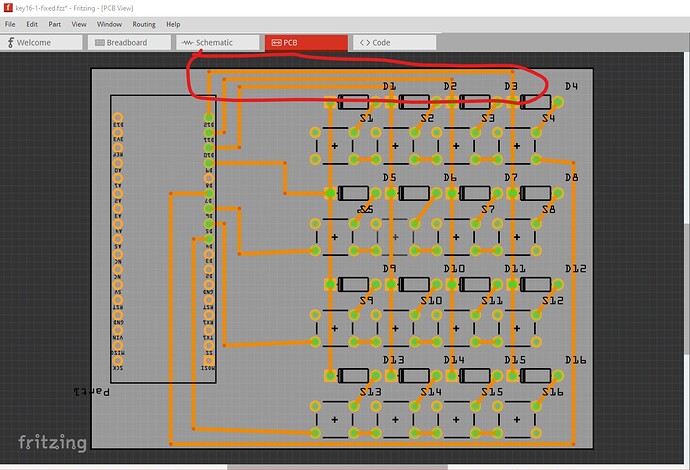 these changes are in this sketch.

Now a suggestion, I would replace the 1n4001 diodes with this small signal part (the holes in pcb are smaller suitable for 1n4148 small signal diode which is all you need here.

Since I have need of a small signal diode (specifically a 1n4148) I have circled around to where I started on parts creation hell and finally done a series of small signal diode parts. Since I was doing it anyway I included a wishlist request for various sizes of foot print (from a 100 mil spaced vertical to 500mil spacing for jumping over traces) on the way by. At the same time I fixed a bug in the 1n4001 part where the pcb footprint is 300mill but the breadboard footprint was 400 (now reduced …

As you note autorouter appears to have bugs which probably should be reported on github, but autoroute isn’t a high priority (there was discussion of removing it during the last set of fixes) so I don’t expect anything will happen soon.

Thank you for the thorough answer! I’ll look at the small signal diodes.

It is a known problem. This is the open issue in the bug tracker:

Fritzing is generating double routes between some parts in PCB View

_From [fernaand...@gmail.com](https://code.google.com/u/103843632457594732081/) …on April 18, 2014 02:12:03_ What steps will reproduce the problem? 1.in schematic view place 3 resistor and 1 generic female header 4 pines 2.connect ping 1 from each resistor to the 2-4 pines in the header 3.connect the other resistor pines (number 2 of each resistor) together in the pin 1 of the header What is the expected output? What do you see instead? Fritzing creates double routes when it makes the autoroute task What version of Fritzing are you using? On what operating system? Version 0.8.7 (b1bf5 2014-01-24) Cocoa [Qt 4.8.5] Please provide any additional information below. This is only an example about how to place the parts, the original file is an array pf leds with its own resitor of 220ohms and a connector to another PCB _Original issue: http://code.google.com/p/fritzing/issues/detail?id=2946_

I added a reference to this thread so they know it is still an issue in 0.9.9. I expect it is low priority though.

I wonder if it is caused by using THT parts with a single sided PCB?

Doesn’t look to be that simple. I started with this 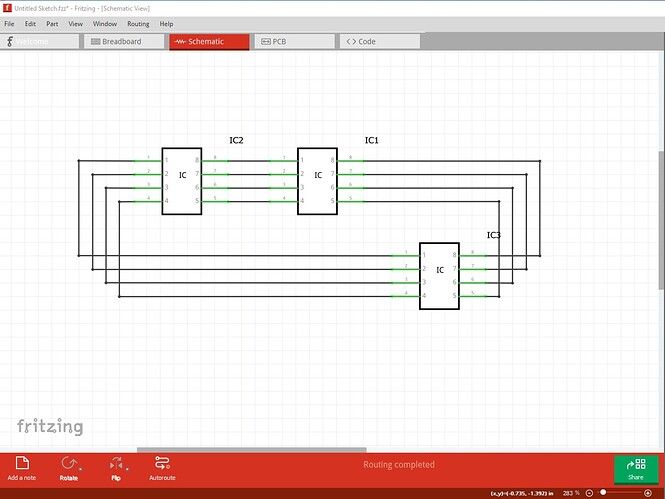 then autorouted with SMD on the bottom of the board 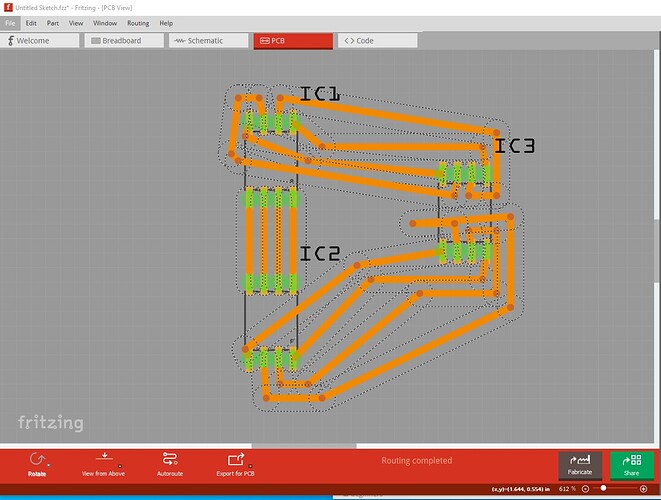 which works, then switched to tht (still single sided) and autorouted but it also worked correctly. There looks to be something more complex going on. 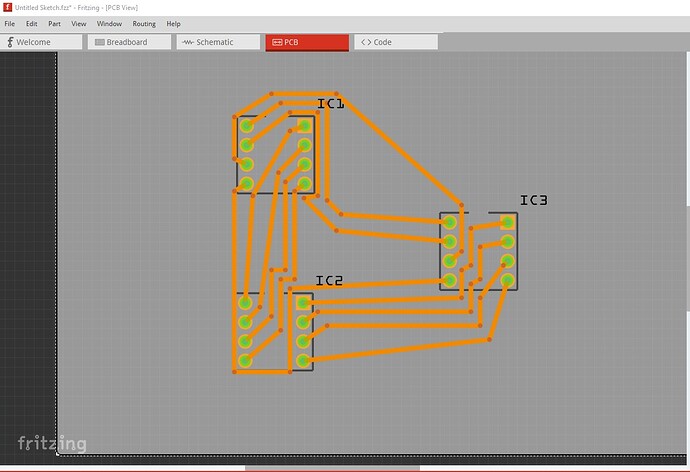