I’ve been searching everywhere for the Obstacle avoidance IR Sensor module for fritzing without any luck. Would someone know where I can get it?
Thank you for your help

We would need a data sheet or a reference to which obstacle avoidance IR sensor you are looking for to suggest much as there are lots of them.

Sorry, thought there was only one

Here’s a link of the item

While that is one of the more common ones, a quick search doesn’t turn up a fritzing part for it (or more probably I’m not using the correct search term). You might have a look at the projects area on the main fritzing site, there are often parts like this used in projects there which can be then be harvested for reuse.

I did spend a few hours searching projects, again without luck.
It seems like a very common part, but… nothing

I’ll have a better poke around in a bit, and if I can’t find one I’ll think about making one.

When it comes to electronics, I’m completely useless, but I’m learning

When it comes to electronics, I’m completely useless, but I’m learning

We all started out that way, and learning is how it is cured

. I have one of those modules which is called the FC-51 (although even with its name, there doesn’t appear to be a part) so other than the right angle header (which also doesn’t exist) it was easy to make. Available here in parts submit (so it will eventually make it in to core):

To my suprise there was no part for this common ebay module, nor for the right angle male .1 header that it uses (which was the most difficult part of this to make :slight_smile: ) so I corrected that. All three views although PCB is minimal. fc-51.fzpz (21.2 KB) Peter

Thanks Peter, very much appreciated.
Now I can start working on my fritzing module
Again, many THANKS
Lloyd

Hey, I have the same Problem with the exact same sensor Module.
Could you explain me how u included ur Module?
I would really appreciate your fast help.

Do you mean how to install the .fzpz part into fritzing.

You can use File/Open, or in parts bin MINE you can right-click import.

FYI - the LED part in Fritzing has color selection with includes IR Led’s.

Basically, for choices to sense the obstacle, you may be interested in:
IR, LDR, Ultrasound, Laser, LED… etc.

Each works and uses somewhat similar interface and code (either On/Off pulses or signal voltage (such as to Arduino Analog pins):

A light emitter, a light receiver and Resistors and Caps as needed to tune it for the ambient (and usage) lighting.
Ambient, Flashlight and Laser light is also an emitter, thus, needing only a receiver such as LDR.

They are ‘all’ easy to work with and Arduino has several example codes.

The image below shows:

Basically, these sensors are switches that trigger when light is blocked/changed to the degree that you set in the code (in Arduino, for example).

Thus, no need to buy an off-the-shelf sensor - just grab some from Amazon and in 3 minutes you’ll have a gizmo…
Gikfun has 10 pairs of IR emmit & recv for $5 on Amazon.

Be sure to check the specks for your sensor’s/led’s… they differ from one brand to the next. 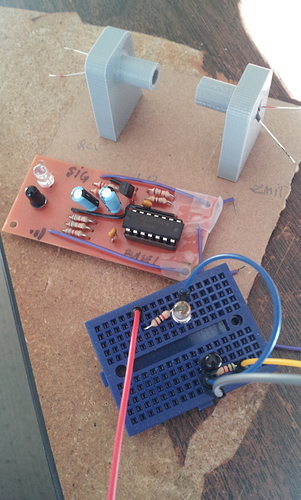