i’m confused. i donated and purchased the latest version today. Great tool. i spent all day creating three custom parts. They show up in my parts bin. i create three circuit files, versions of each other. i decided to start over. i deleted the files. I discovered creating a new circuit that my parts bin is now empty. Aaaaaaarrrrrggggghhhhh!!! Uhhh, the bin is temporary? Should I have known to somehow squirrel it away for future use? I had to stop development until I figger out how to make them all over again and remember them. Bad taste in my mouth.

Welcome aboard! This is a custom part loaded: 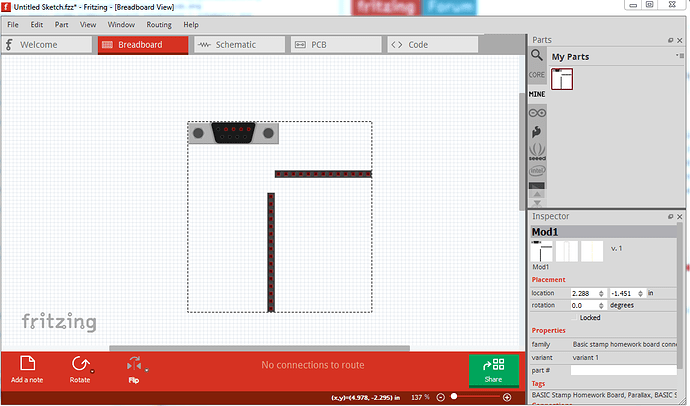 (despite its odd appearance it is useful when its second half is present, I was too lazy to load both.), we see it is present in the mine parts bin on the upper right. If I now exit Fritzing by clicking the close x (this is Windows) circled in red here, I get this message: 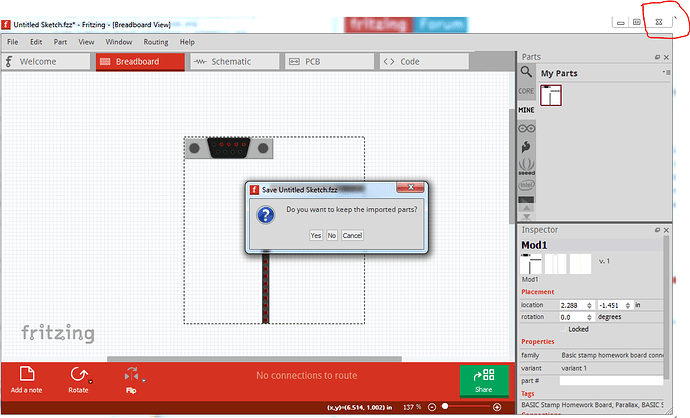 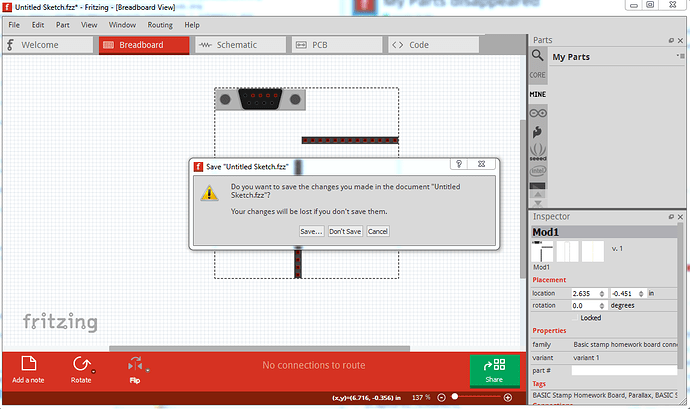 I would guess you answered no to the save parts prompt. It is also possible to corrupt the user directories (where the mine part bin is stored) although it is somewhat more difficult in 0.9.4. As a result I tend to right click on a part in the mine parts bin and select Export part. That writes the part as a .fzpz file to the file system (outside Fritzing entirely.) If the user directories become corrupted I can reload the .fzpz file for the parts via the File->open command in Fritzing. If the parts were complex, you could check the user directories (which are different depending on operating system) to see if the files are still around (Fritzing sometimes forgets to erase things) although that is a long shot if the parts aren’t appearing.

Thanks for your response Peter. I probably said no to saving imported parts. Save in the drawing is what I presumed it meant, not save your work or you will lose it. That’s what I thought I did when I saved new part in the parts editor. I’m still confused.
I ended up creating it again, exporting it, answering yes to all the questions. Same problem. New files can’t find it so I have to import it each time. That’s rather annoying. I still don’t think I’m grasping the concept.

That’s what I thought I did when I saved new part in the parts editor.

No, the save as a new part in parts editor writes the new part to the mine parts bin, but doesn’t save it anywhere permanent. I will admit we don’t have as much documentation as we need (we just haven’t found anyone to write some

so asking questions here is usually how folks learn unfortunately.

I’m still confused.
I ended up creating it again, exporting it, answering yes to all the questions. Same problem. New files can’t find it so I have to import it each time. That’s rather annoying. I still don’t think I’m grasping the concept.

Me too! If you answered yes to all the questions the new parts should remain in the mine parts bin when Fritzing restarts. It sounds like the export worked, and you can at least reload the .fzpz files, but that shouldn’t be happening. Here is an example, initially the mine parts bin is empty: 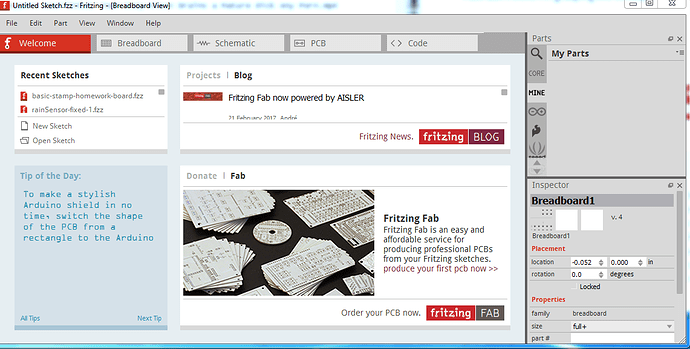 So I used File->open to load a part (this is identical to creating and saving as new part in the parts editor): 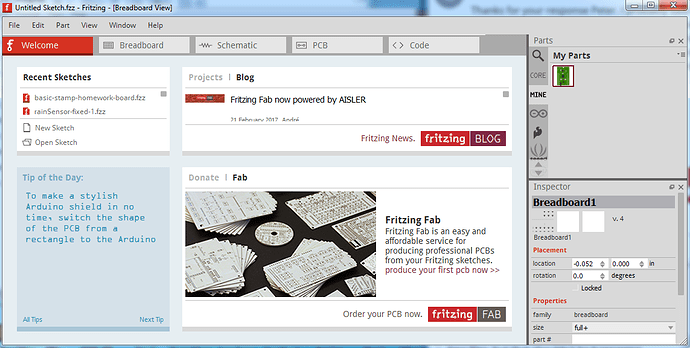 then I shut down Fritzing answering no don’t save to all the prompts. On restarting Fritzing the mine parts bin is now empty again: 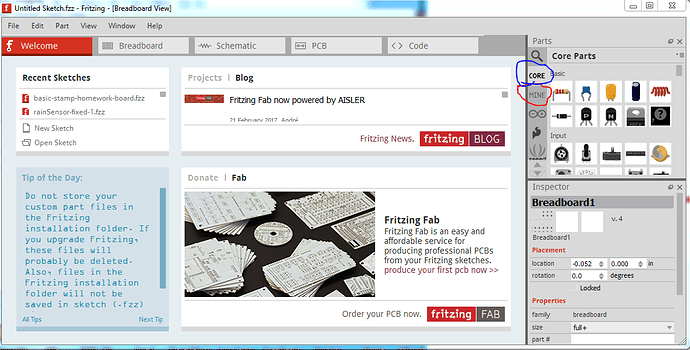 click on the mine icon to change to the mine parts bin and my part reappears: 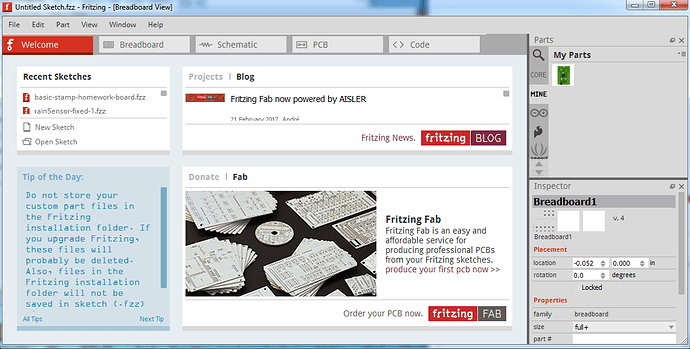 ?) Thinking about it, that can’t be correct because Fritzing should complain that “there is already a part called x loaded” when you try and load the part again. My best guess is that there is a permissions problem that is stopping Fritzing from writing the mine parts bin. I think the best bet at this point is to clear the user directories which will clear the mine parts bin and cause Fritzing to recreate them when it finds they aren’t there (you will lose anything stored there though so make a backup!) The file names depend on operating system:

There are two user directories (with your parts and the parts database) which don’t get touched during an install (to not affect your sketches during upgrades). On Windows they are in

If you don’t have any parts or sketches you want to keep you can just delete those two directories and Fritzing will recreate them, or you can move them aside by renaming them if you wan to keep something in them.

Then see if things work better. Fritzing sometimes is lax about checking return codes and will fail silently if it can’t write a file so that may be what we are seeing here.

A late thought, try scrolling down the bin list and see if you have more than one mine parts bin. That has been a problem in the past although we don’t know how to reproduce it. Clearing the user directories usually clears it, but Fritizing gets confused when there are multiple mine parts bins and that may be what is happening here.

The up/down arrows are circled here (by default it starts at the top. Here I have stepped down to the bottom and selected the Wemos bin:

there should only be one mine parts bin, if there are more, that is a problem.