Messed up PCB after reloading

I spent 2+ hours working on a breadboard, schematic, and PCB. When I was done, I exported a gerber, looked at it on OSHPark, and saw that I had some work to do. I had exited Fritzing though, so I reloaded it, and opened my project.

A couple wires on the breadboard now showed dotted lines that weren’t there before, and many things on the PCB are messed up:

I expected to open it and see what was there when I last saved!

I’ll attempt to attach my project file if I can figure out how. (It requires the Adafruit library.)
Apparently .fzz files aren’t “authorized” to upload? I’ve attached a screenshot, highlighting some of the issues, and uploaded the project file to my site: http://www.surprisingedge.com/files/busy-box.fzz 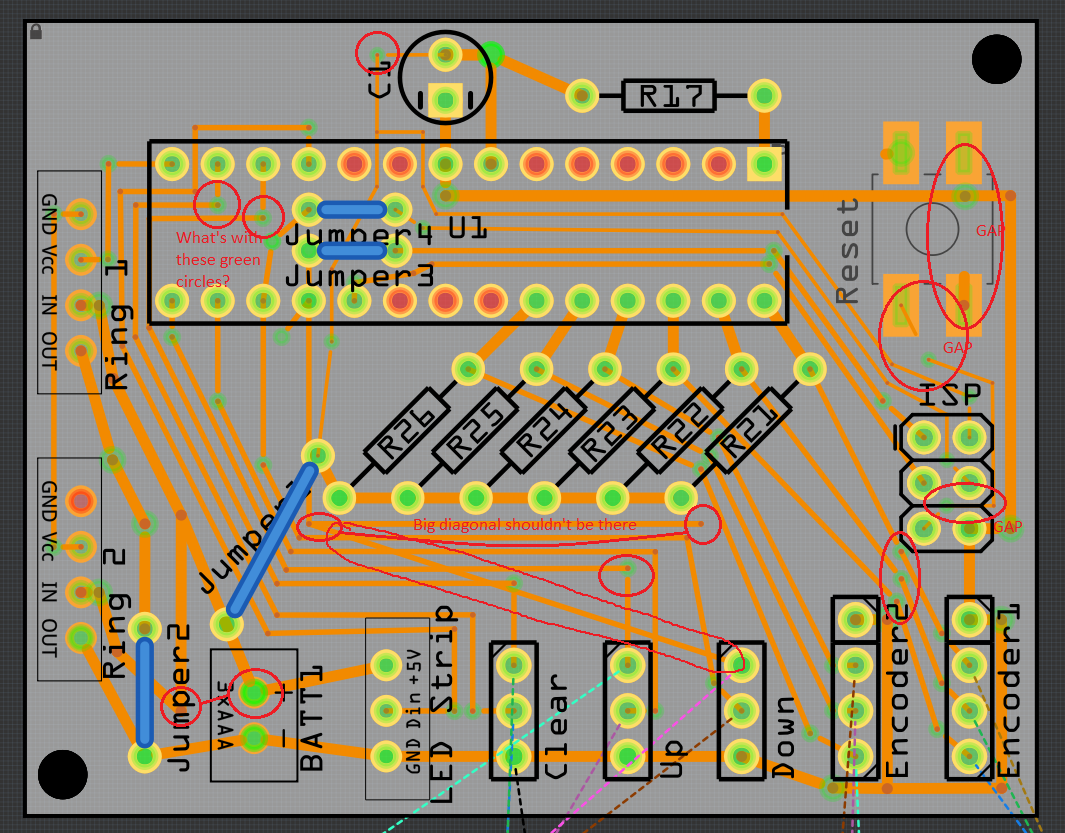 Here’s how the board looked when I exported the gerber and uploaded that to OSHPark. As you can see, the traces that are missing in Fritzing are there, before I closed Frizting and re-opened my project.
(Well, I would add it, but apparently new users can only add one image.)

It happened after exporting to gerber.

Hi guys, this is another instance of this very hard to catch issue: https://github.com/fritzing/fritzing-app/issues/3115

We finally managed to fix it, the patch will be released in 0.9.3. Until then, whenever you encounter it, do not save the file but just close and re-open it. It’s a loading anomaly that only happens once in a while.

Great! Thanks for the update. I think it may be too late for my file, because I saved before I noticed the problem.

Do you have any rough idea when 0.9.3 might come out? If it’ll be a while, are experimental pre-release binaries available anywhere in the meantime?

I want to know the same thing, is there a estimated date where those patches will be released?

I had a similar issue after creating the pcb but not the schematic. After connecting all the wires in the schematic, the pcb view did not have a problem. Don’t know if this issue is related to my issue or not.

Well, also I noticed, that ANY export is messing the PCB. Even XML or SPICE… I could step back only because I store files in GIT, so I checked out old versions.

Well, while there is no update I got an workaround.

Close Fritzing. Open it again. Open good file. And then open broken file. It will be ok. Then save it.

Confirm. I just got the same issue.

Sorry guys, the release will be out in a few weeks. It’s tied to another feature (continuous part library updates) that we need to iron out.
The good news is that this release will also fix broken files!