The LM393N is an 14 pin DIP IC chip.
It is commonly used in ADC converters, Comparison circuits, Op-amps and wave-forms.

Fairly nice job, schematic however is fairly messed up. 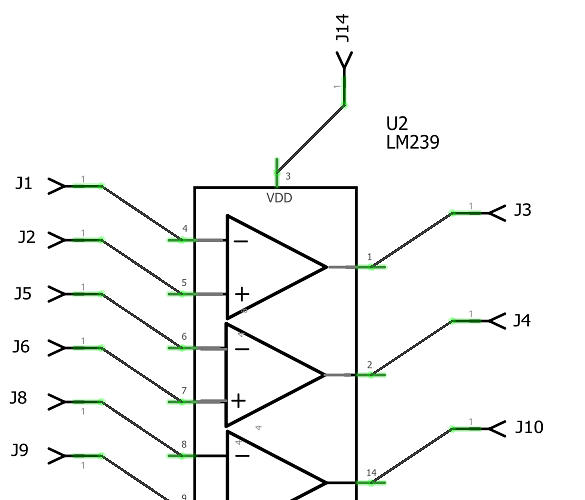 The top one in this png is your part. Note the pins are not aligned on the .1 grid and the pin numbers don’t match breadboard or pcb. The connectors (J1-J14) match the pin numbers in Breadboard and PCB, but in schematic they go to the wrong pins. The connector lines are connecting in the middle of the pin because the teminalId is a group, and that won’t work as a terminalId. The chip in the bottom is yours with the problems corrected and subparts added. The difference subparts makes is that each individual comparitor can move (as comparitor2 is in the image) independent of any of the others. Your schematic happens to be laid out correctly do subparts so I added them. Below is the improved version of your part (which I would encourage you to submit to Fritzing-parts on github to be included in core) and the test sketch the image is from so you can see the differences.

Replaced both files with a version that has the pin numbers corrected. Comparitors 1 and 2 were reversed.

Thanks so much for taking the time to look this over, make the corrections and for encouraging me to post it on GitHub.

I’ll see if I can figure out that whole process now.

I attempted to add the part in GitHub. Let me know if I can improve how I did that process as well.

The pull request is in, and el-j (the parts maintainer) should comment if he sees any problems with it.

Unfortunately the pin numbers on comparitors 1 and 2 are reversed (which the parts maintainer caught). I have corrected the part and the test sketch above and replaced them with corrected versions. You will need to change your pull request to this version to get it accepted. For anyone that has downloaded the original part, please download the corrected one a couple of posts above!