I just bought version the latest version. But I can’t install it, because an error appears like
Notwendige Voraussetzungen Visual C++ nicht erfüllt.

Others seem to have the same problem. Where is a solution???

Which version are you trying to install? Fritzing 0.9.8 installed fine on Win 10 (although I have a development machine which in fact has Visual C++ installed.) However Fritzing 0.9.9 may have been released yesterday and if that is what you are installing, there may be a new problem. Usually such a complaint is about the C runtime libraries (circled in green here) although I also have Visual Studio (circled in red.) If the runtime libraries are missing (but I believe they have been a standard part of Win10 for a long time) you will get an error. 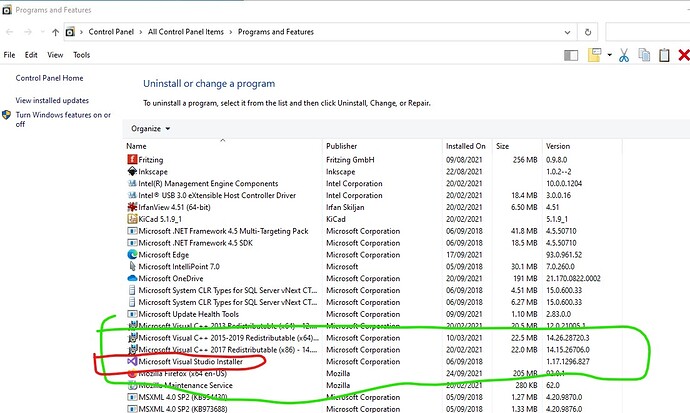 I just installed Fritzing 0.9.9 on this machine with no problems, it is installed and appears to run so it looks like it is something specific to your machine (possibly missing Visual C++ Redistriibutables.)

Normally the necessary dependencies should be installed by the installer. Another possibility is to download and install them directly from Microsoft:

Normally the necessary dependencies should be installed by the installer. Another possibility is to download and install them directly from Microsoft:

Thanks for helping!
( You must first install vc_redist.x** as admin. After that fritzing is installed correktly.)

Same for me. Could only install Version 0.9.9 after manually installing the MS dependencies.

This github issue may be related, although the error message is not quite the same:

Error while trying to install V 0.9.9