Hi All!
I have been using Fritzing for some time now.
I mainly worked with it using the shematics view and then the breadboard view. The later often using a veroboard.

Now I will build it on a breadboard, but there is no match in parts.
Not for any of the boards I got.

Of course I can use the standard breadboard.

Looking at my boards, they are all built by modules.
That gave me the idea!
Would it not be nice to have breadboard building blocks that are rezisalble, just like the veroboard?

It would also be nize with two breadboard views, one for the veroboard…

It is possible. It would need a code change to make it resizeable within Fritzing though (and that is unlikely to be quick). Do you have a link to the breadboard that you want? I have seen (and have) some odd sized ones from ebay but without power strips just strips of contacts, but don’t know of any that match your description. A fixed size on could be created as a custom part (and a script could be written to make custom sized ones) although probably not via parts editor as breadboards are special. 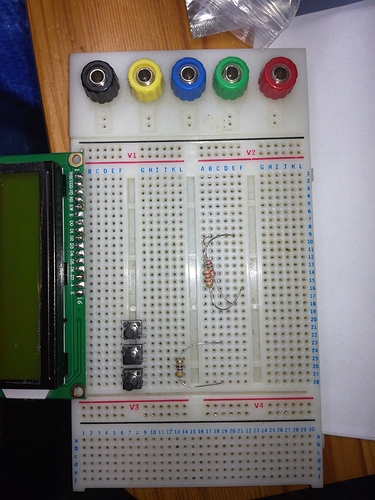 Ah, this appears to be two standard full size breadboards without power strips and a standard full size power strip (which Frizting doesn’t currently have as far as I know) across each end of it and a full size breadboard the other way attached to the end. So a custom part would be possible but a lot of work as the 900+pins in the breadboard would need to be renamed for the second and third breadboards. The banana jacks appear to go to two pin headers just white instead of the standard black. I’ll have a look at splitting the power rails from a breadboard in to a separate part (leaving just the breadboard with no power rails and a two row power rail). That would allow you to make a sketch with as many breadboards as you want while leaving the pin renumbering at a somewhat reasonable level. A quick look at what breadboards we currently have against the ones in your photo indicates it isn’t going to be all that easy as yours are a non standard size (28 pins on one and 30 on the other) and the power strips also appear non standard (i.e. they appear to end in the middle to split in to two independent units rather than connecting the entire lenght). I’ll look it over and see how much work it would be.

THAT is a GREAT response Peter!!

I really like the board, the only drawback is that I can not extend it with other boards.

@Gohper I really like the look of the configuration of that board. Do you remember where you got it ?

Just to make sure I’m reading this correctly, is it true that the black line on the power strip connects the whole way across but the red section only connects to the middle and the 2nd red section is independent of the first? The V1 and V2 labels make that likely but a check would be good. I’m cutting down a breadboard to create a power strip to see how much work this is going to be and if the concept will work (I think it will work, but it may be more work than I care to commit to).

Edit: Somewhat luckily I started with the power bar as being simplest. On the way by I updated the part to current standards (which turns out to be very fortunate!) before I noticed that your breadboards are very non standard. There are 6 pins per row not 5 as with a standard breadboard. Unfortunately that makes converting a full breadboard (some 900 pins) very difficult. On the updated part that is much simpler so I made the changes in this part. I’d say in order to actually do the breadboards it will be necessary to make a script that will auto generate the necessary breadboard files and I’m not sure that is worth doing at this point.

where the top row is all bused together and the bottom row is 2 groups of 12 each bused together. Because I converted the connections from groups to the circle in the center of the pin this part is much easier to change to than the default breadboard it was made from. To do your boards I would need to make a breadboard with 6 rows instead of the standard 5 which as noted would be a lot of work for an uncommon part.

I’ve been off from electronics for a while, due to lack of time, but it was something with the powerstrip.
I will give You an answer when I am home from work.

Yeah, the setup is really nice, big in one way but still compact!
If you find one, olease notify me, I will if I find one!

Maybe it could be built from smaller breadboard pieces…

They are splitted Peter.

I thought from the layout of the lines that was likely, unfortunatly at the moment for something that is no longer available changing the breadboards is just too much work.
The change from 5 per row to 6 has a lot of implications (each pin is 15 lines of xml in the fzp file which needs to be in the correct sequence and then matched to a definition in the bus section to cause the 6 pins in your case to be bused together. I may at some point clean up the current breadboard definitions to make it easier to change but not right now.

I understand.
But maybe for the future a modular breadboard, as a goal.
The idea was not actually my board, but to make it modular using standard blocks.
I also have a lot of 30x5 on both side of the trench and power strips over and under. Is this the standard size? Or full+?

The idea was not actually my board, but to make it modular using standard blocks.

I think we have all the current standard sizes other than apparantly the power strips (which are currently integral to the boards). We have full, half, tiny and mini which I think are the standard ones available today.

I also have a lot of 30x5 on both side of the trench and power strips over and under. Is this the standard size? Or full+?

That should be one full plus (the default breadboard)
I think. The full is a bit bigger and without the red and blue stripes (perhaps an older version of the breadboards). If I ever manage to get the development version working on Windows I eventually want to clean up core parts which would include the breadboards (which are currently a bit odd probably because they are from the first version of fritzing) by current parts standards.

edit: It looks like your version is still available, a look at google to see what types of breadboard are available turns up this (which looks like the one you have) with a claimed 200 in stock.

You are the king! Iwill order two on monday!!!