I need a library mp3 player module with 2w onboard

Is there a library for this part 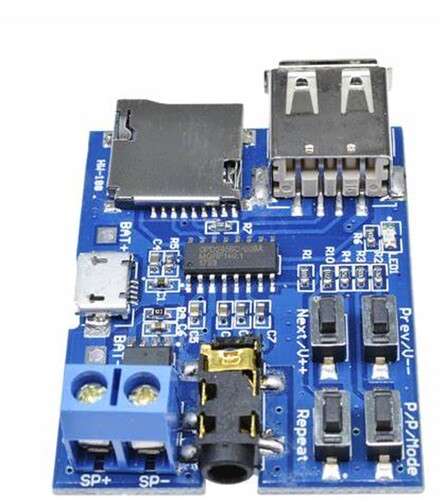 Probably not and there isn’t enough information here to make one. We would need a web site preferably with a mechanical drawing and a list of the connectors and functions to make a part.

Found the part via a google search, this part should do what you want. There is no pcb view as it isn’t useful.

Thanks So Much Peter, I’ve been looking for this part for a while now and I found the forum to post my question. But it’s a little sad that it doesn’t have a PCB view anyways, thanks

The PCB view of a part file (library part) is for the footprint of the part when it is placed on a PCB. This part contains a PCB, but does not get added to another PCB. Therefore there is no PCB view for the part.

To have the PCB “OF” the part would be a sketch file, not a library part file. That would need a lot more information about how the part is created, which only the manufacturer typically has.

What do you want to do with pcb view? I didn’t make one because it doesn’t appear useful (the whole part is of doubtful use in fact.) Most of the connections are via connectors which won’t usually connect to a pcb, the only exception is the pads for the battery (which looks to also be able to be powered via the micro usb connector.) This device has no external controls which could be used by Fritzing. It reads the data from the SD card under control of the push buttons (which are not broken out in a way that could be controlled by Fritzing) and the output is either to headphones via the 3.5MM jack or the speaker via the screw terminals. Given that there doesn’t seem to be a purpose for pcb vew unless there is something I’m not seeing (which is possible!)

and do you have a library for bldc motor

I don’t see how a gerber would be useful. The only connections on the board that would appear in the gerber are for the battery connection. As noted the switches that control it and the input and outputs are all connectors which won’t connect to the pcb. The part itself doesn’t appear to be able to be mounted on another pcb board as it doesn’t appear to have mounting holes. Are you trying to power the board from the battery terminals? In order to make a pcb view I would need to know what you are trying to do with the pcb view to see if it can be done and so far I don’t know what you intend.

and do you have a library for bldc motor

I don’t know because I don’t know what a bldc motor is. If you have a data sheet or web site for the motor I’ll have a look at whether there is one or not. A google search for

turns up some hits, but a data sheet would be better.