Frustrated but think I have a workable solution.

My project (a guitar pedal faceplate) calls for the use of 8 pots but my UNO only has 6 digital pins. So…

I decided I could switch between which set of pots my app (pure data patch) reads for inputs.

I am going to try the following but am hoping you might be able to tell me if I am doing it the right way.

The switch (I think :-)) will send the current to either the left or right set of pots, right?

Then if the middle pins are sent to the same row for each pair and then to a0, a1, etc, it will only read/give me the values for the selected pot.

Look forward to sharing in the forum.
Button_sv.fzz (14.1 KB)

And thanks in advance.

Peace and many happy returns to you.
-svanya

A Uno actually has 14 digital input pins, but only 6 analog pins. If you are actually trying to interface pots, then yes you would need to multiplex some of the analog ports, however your drawing (such as it is) shows rotary encoders which are digital (and not pots). So the place to start is likely tell us what is actually there … Assuming you are trying to multiplex analog signals your mechanical switch could be replaced by an analog switch IC letting the software operate the switch for you.

First, woah! I am sooo out of my league. (But won’t give up!) Most of what you said went way over my head.

And as learning fritzing is not really what I want to do, I’ll try saying it in pictures (see below).

The process was two fold:
first I built a 4 pot and 3 switch (guitar) controller which was easy (sort of :-)). Using the parts below

then I cannibalized a guitar and added

So I was going to add a

To switch between the original four knobs and the 3 new knobs.

But including the tremolo pot, 5 of my 6 analog slots are in use.

Stumped, right? unless I toggle between the two sets using the toggle switch?
I included the pics to give you some idea of what I have and where I would like (:-)) to head with this.

Thank you, sooo much for your help.

Tho not “married” to this project (i tried that, didn’t like it). I am Severely addicted to it.

Peace. Look forward to learning as much as I can from you.
Thank, again, for your help.
-svanya

p.s. to me an even MUCH more complex issue I am (mentally having) is what signals do I pass in lieu of pickups?

And I think I would send the red to 5v and the black to grnd. But in the world do I do with the white? (oh, I have it attached to a classical guitar with piezo pickup (which has a 1/8 stereo out on it). 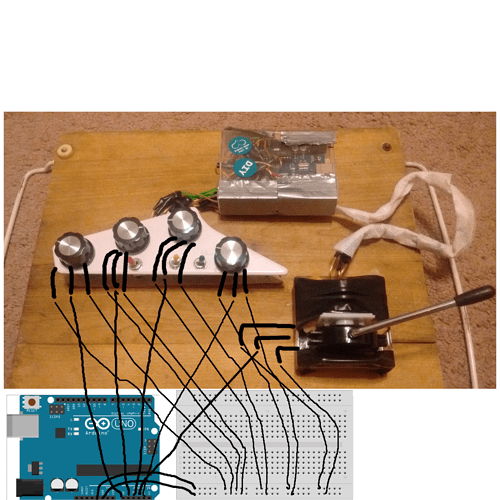 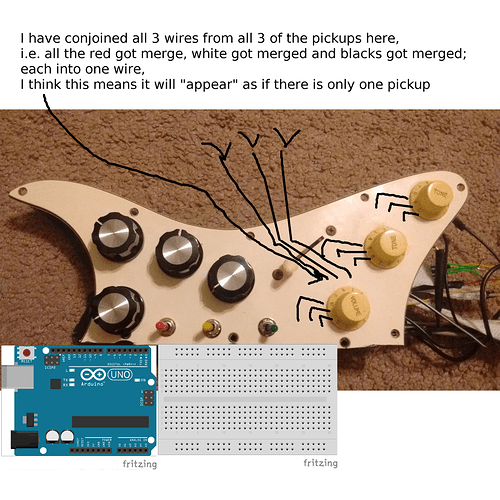 OK, out of your league isn’t necessarily a problem, I just need to explain more clearly. Your original fritzing diagram has digital shaft encoders not pots and the shaft encoders don’t use analog ports but rather digital. From the pictures it looks like you actually have pots which will produce an analog voltage and indeed need the analog ports of which there are only 6 of on a Uno. While one option would be to use a mechanical switch to switch between the pots, what probably makes more sense is to have an analog multiplexer IC (which is like a mechanical switch in that it switches more than one analog input to a single output) but it is controlled by a digital port from the Uno rather than by you physically. That meas that the software in the Uno can select which pot it wants to read without human input and can thus appear to be able to read 8 pots with only 6 inputs. Once you get the position of the 8 pots read by the Uno then what happens? At present all that I see is that the position of the 8 pots will be readable by the Uno, there isn’t any indication of what it will try and do with that information as it doesn’t appear to have any outputs. If all you want is for the Uno to be able to read the 8 pots, then either a mechanical switch or an analog mux should do the job. As to the connections for the Uno assuming that the red and black wires are the ends of the pot and the white is the wiper, then yes the red wants to go to 5 volts the black to ground and the white wire to the analog input port on the Uno. When the knob of the pot is moved (assuming the wiring is correct) the white wire will change from 0 to 5 volts and the Uno will read a value between (I think) 0 and 255 from the analog port which corresponds to the position of the pot.