Fritzing 0.96 version crashes everytime when exporting gerber file, no matter under Mac OS, Window or Ubuntu.
Crash error information is as below, how to solve it?

Post the sketch (the .fzz file) here (upload is 7th icon from the left in the reply menu) and one of us will have a look at the issue. The most likely cause is a badly configured part.

Gerber dies for me too. It looks like one or both of the custom parts are incorrect, I’ll have a look and see if I can correct them. DRC is reporting overlaps which likely means incorrectly configured parts: 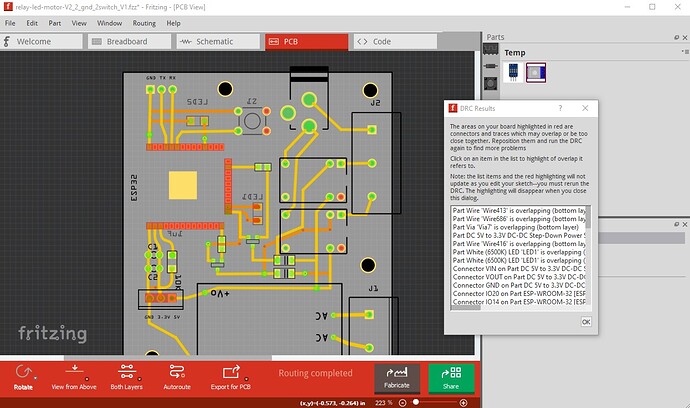 To my surprise it isn’t the user supplied parts (although both are wrong) but the Q4 sot23 transistor from core parts (I don’t yet know why). I deleted all traces and most of the parts (leaving the holes and vias) verified it would export as a gerber, then added the parts back in one by one by undoing the deletes one at a time then doing the gerber export until it broke at Q4. This sketch (with Q4) breaks in gerber export: 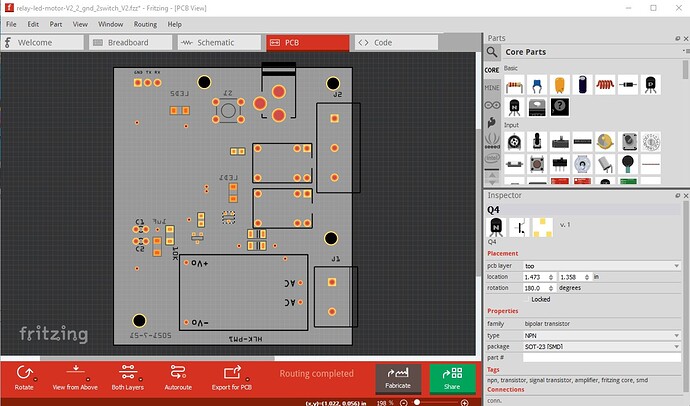 with Q4 removed it exports successfully. I’ll have a look at the part and see if I can see why it is breaking. 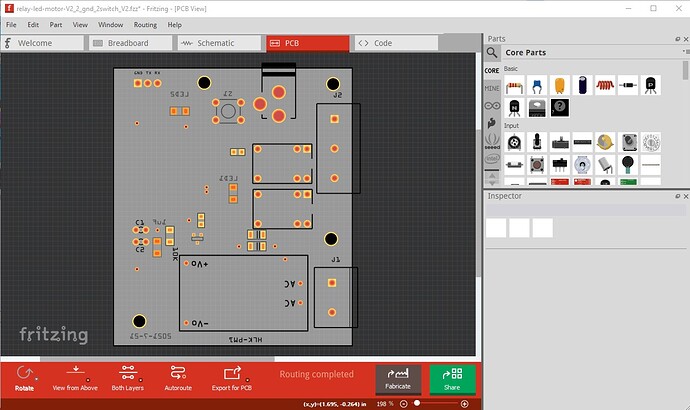 the sketch the above two images were created from so you can try it for yourself. This sketch should die in gerber export, deleting Q4 fixes that.

edit2: A workaround (this appears to be a Fritzing bug which I will report!) If you change the rotation of Q4 from 180 to 179 gerber export then works: 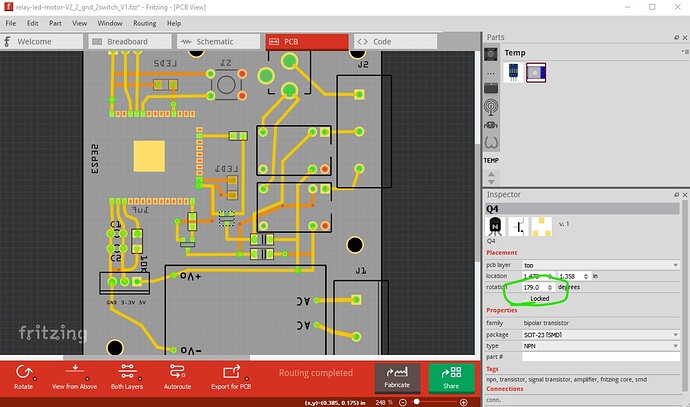 That still leaves the part errors though. For the esp32, replacing the current par with this one should fix things up:

Unfortunately there was more wrong than just the scaling. Some of the pins in schematic were also wrong (likely due to the pins not being in sequence) and the grounds weren’t bussed. In the end I renumbered the pins as that was easier than trying to figure out the current scheme and cleaned up schematic and changed a couple of pins that don’'t match the current data sheet on the manufacturer’s site. edit: replaced by a new part posted below. Peter

Here is a fixed copy of the other custom part. The current one lacks a copper1 layer in pcb among other faults. The moduleId is the same so you will need to delete the current part (and shutdown and restart fritzing to really delete it) before you can load this one.

Some of your vias are overlapping parts. This will work fine usually, but will cause DRC to complain.

This has been fixed (or at least no longer occurs