Hi, I am searching for Digispark USB part but everywhere I got I get the Attity85.fzp file as text. Where I can get the actual board and the png images.
I am new to Firtzing and need help.
Thanks

An alternative to the Digispark board is to build your own - very simple and far more robust for prototyping than the Digispark (if you have some patience and familiarity with Arduino).

Several Options that I built years ago and still use…

#1) Uses Arduino as an ISP with ZIFF on BB for programming Atmel 324 (the chips on the UNO).

#4) My ‘goto’ breadboard - Simply an UNO for programming Atmel 328 chips.
Can remove the Atmel328 Chip from the UNO and plug in another 328 chip to program as usual.
They can be stubborn to pull out of the socket but, with a $1 pulling tool, easy!.
(Install a Pin-Header into the existing pin-header (to add height for clearance) and plug in a ZIFF for making it easy for future programming - shown).

Many programming guides on the net and at the Arduino site…

Once you’ve successfully done it, making a circuit board (PCB) in Fritzing will be easy to layout (I haven’t bothered as the BB are working well) 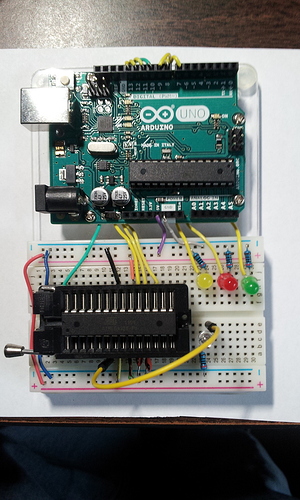 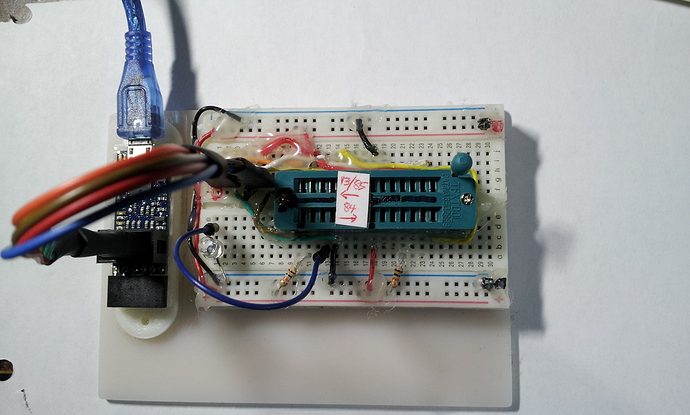 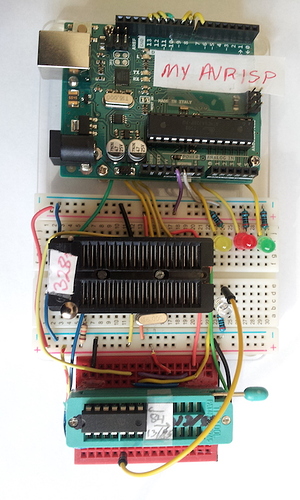 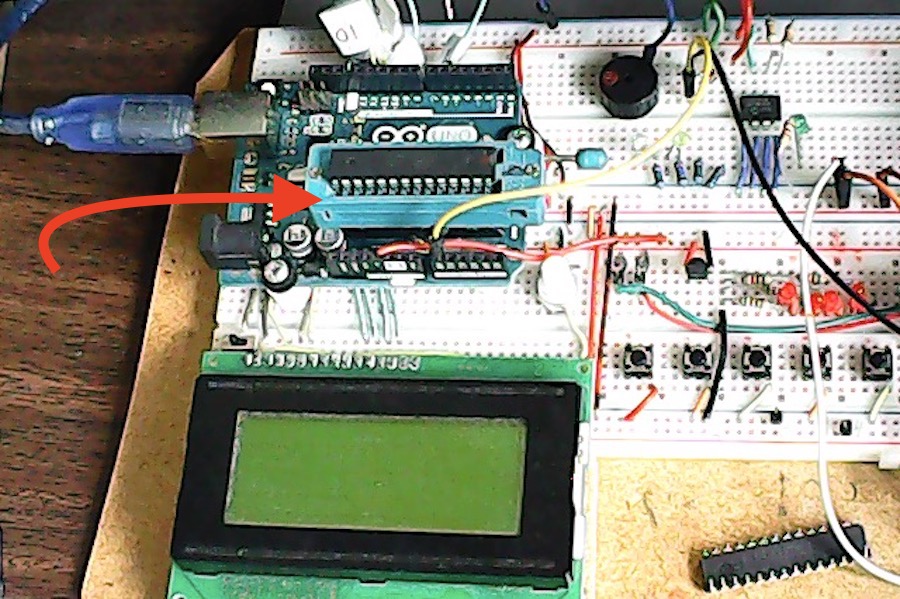 Which shows a part (that I can’t access, perhaps because I’m not logged in to their site) at

If neither of those work for you repost and I’ll consider further. It may be that most people use the Attiny85 chip in core parts for this as the USB side won’t do anything too interesting if Fritzing I expect (the external power pin may be an exception to that though).

I also overlooked the other good place to find parts, the projects page. There is a digispark part in the temp parts bin in the .fzz file for this project:

This part may be identical to one of the two above or not. If you load the .fzz file and then right click the part in the temp parts bin then click export part (of just drag the part from Temp to your mine parts bin) you can reuse the part in other projects. Looking at the part, it isn’t in very good shape though (schematic is not on .1 grid, pcb looks somewhat suspect), so if neither of the others look better, post again and I’ll fix one or another of them it to a proper part.

what is this? are you trying to sell a product?

Thank you Vanepp,
Actually I had come across the page you sent me before posting this post but I did not find the link to zip file. But now I looked at the page again and found the link. The whole page is about the zip file yet zip link was like ordinary text. it should have been with a button or larger text.
thank you for your help.

No, I have nothing to sell.

Only selling the idea that you can make your own Prototyping board with an Atmel Tiny (or any Chip, including PIC’s).

That Digispark is simply a small board with USB interface and a DIP for the Tiny to program and has some pin access.

It’s barely more than a BreadBoard (BB) with the Tiny chip hooked up to some programmer via the programming pins.
Any UNO or Nano…etc can do it.

As I indicated, I use an UNO for all. I also use a Pololu V2 for the Tiny’s mentioned. It comes with software for programming the chip.

I think all the links point to the same part which has some problems (mostly to do with being old). I’m working on a corrected part which I will post shortly (I hope!).

OK here is a corrected part. The original (mostly because it is old) was apparently produced with Inkscape at 90dpi. The current 96dpi version makes the scale incorrect. I ran the eagle brd file through eagle2fritzing to get correctly scaled svgs and then did copy/paste from the original svgs to make this part which meets parts standards and is correctly scaled in all three views. I though about adding the USB connections, but I don’t think they are useful. I did change the 3 power pins from male to female so they won’t short (by auto connecting as male pins do) on the breadboard. You need to run wires to the pin to use them in breadboard view.