Can I line draw a simple box around components?

Yes. The parts bin on the upper right 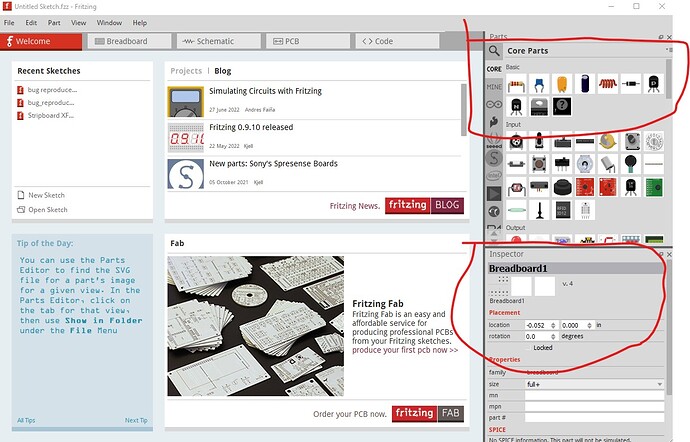 For some components the Inspector window (the lower right) will let you change various parameters.

Can I line draw a simple box around components?

Likely no, although it isn’t clear exactly what you want to do.

I remember now that the main Arduino forum recommended not wasting too much time on Fritz as it is way too limited in parts componentnts etcand making custom parts was too obscure and time consuming. It was voted a good concept when first launched but it has not received any worthwhile development since. Guess the originator moved on. AFAIKthere isnt a usefal CAD app that will address the needs of physical wiring layout diags, cct diags and schematics just dont address the physical layout, let alon cabling and multicore apps.

While development stopped for around 4 years, it has been running again, with new releases and bug fixes for a few years now. A google search for “fritzing part model-number” (where model-number is a description of the part you want) will often turn up parts (of varying quality) on the net. I often make parts for people that request them (as you can see by reading the forums) as they are correct. parts creation is complex. However if people don’t make parts then parts won’t be created … Tinkerbox (a closed source cloud app by Autodesk) is the only other one I know of that has breadboard view. Kicad (open source) is also popular but doesn’t have breadboard view and will not (AFAIK) create schematic from pcb (which Fritzing will) so you need to choose what is useful to you. Fritzing is generally easier to use than the rest of them but has limitations.