Hi,
While I was using fritzing platform, I noticed that the Arduino Nano V3.0 I/O Expansion Adapter Board Shield doesn’t exist. The fact is that I need this board shield in order to construct a diagram for my circuit. Is there anyway to find a .fzp file for this board shield?
Thank you very much.

I don’t see one anywhere, but there appear to be several varieties of them around (with different pin layouts). If you post a link to a picture (preferably a mechanical drawing, although there may not be one) I’ll have a look at it.

I am new to fritzing, I am in fact also need this expansion shield part for my Nano projects, but not sure how to make one from image into fzpz part. Here is an image of it I made using illustrator 6 from some time ago. Any help to convert this into usable fzpz will be very much appreciated! 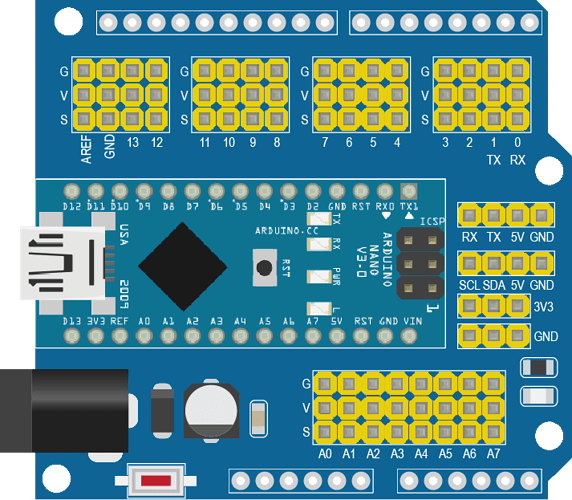 Here is a part for this. It has no pcb view as it isn’t useful, and can (with some issues) take the nano dragged over the nano on to the nano pins and it will connect. It looks like this: 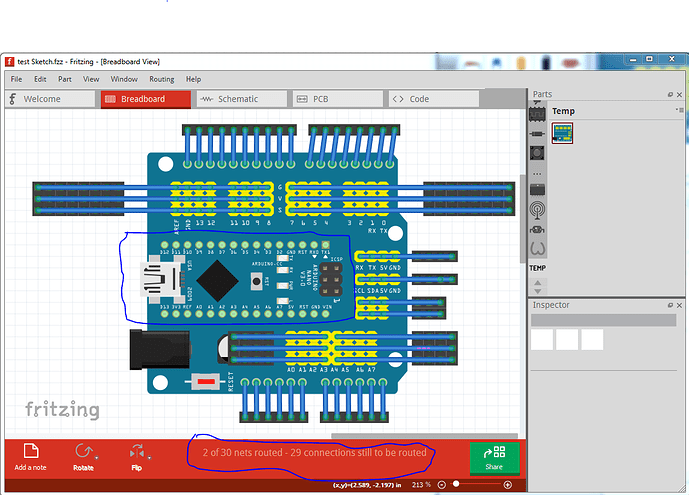 Two issues here, the stock nano is the same color as the shield so the edge of the nano is washed out. As well at the bottom of the screen it is complaining about unrouted nets that aren’t really there. Schematic is also somewhat ugly as the stock nano is not particularly compatible with this shield. That could be corrected with a different variant of the part, if someone wants to make one. 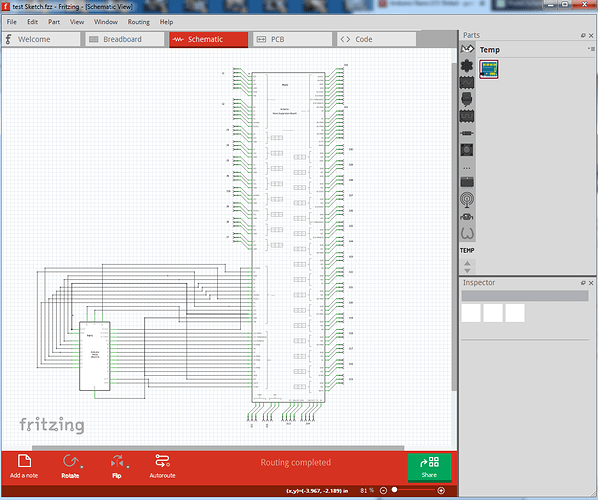 Here is the part:

and the test sketch above:

The part is well fit in version 0.9.3b. Here is my example that I find it pretty neat.

I have been looking for this part over the internet since many months ago but no luck, so I decided to use whatever part related in the core parts and recreate the image.

Anyway, thank you very much for the kind effort! 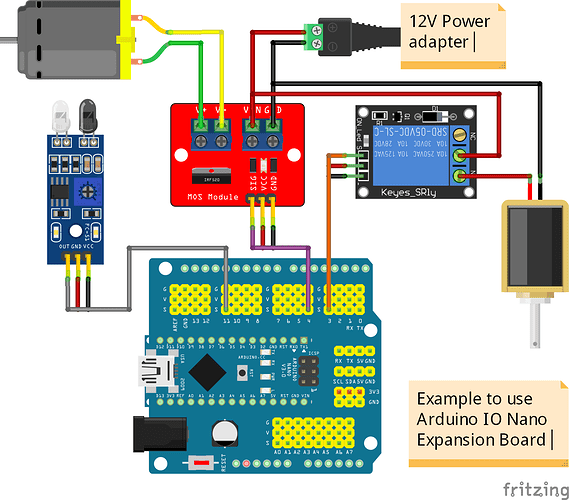 Something ugly has happened to your .fzz file. It is not rendering correctly for some reason: 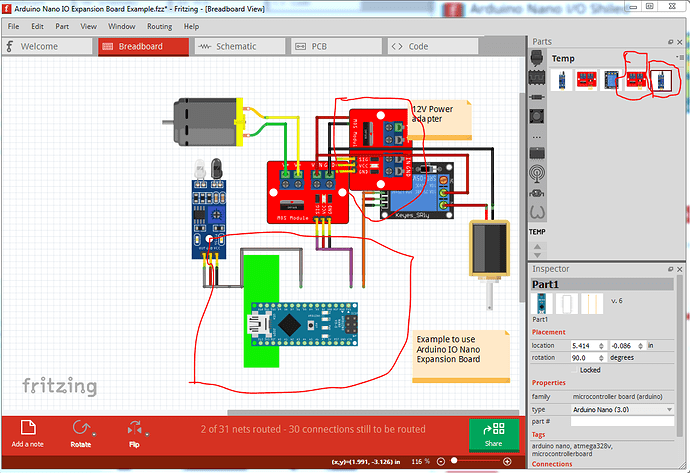 The shield board is missing completely (although showing in schematic). The power plug has been replaced with the IRF520 module, and the icons in temp are wrong. Did you edit the .fzz file by chance? I’ve never seen a sketch like this before … I’ll have a look at the .fzz file and see if I can tell what went wrong. On an unrelated style issue, I would normally do the connections like this (on the fc-51): 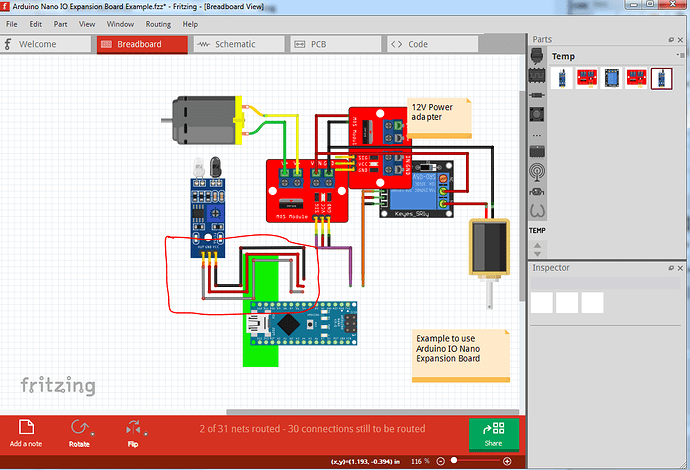 so that it is obvious that there are three wires in the bundle at a glance and where they connect to. Either way will work, but I prefer the connections be obvious at a glance.

Owh, its weird that the parts are scrambled all over the sketch, same goes when I reopen my fzz.

Well my first fear is unfounded

, I was wondering if the no pcb in the Nano shield was having an unexpected effect, but it doesn’t appear so. It looks like something on your system corrupted the fzz file when it was written. I recreated the sketch and it appears to load fine now: 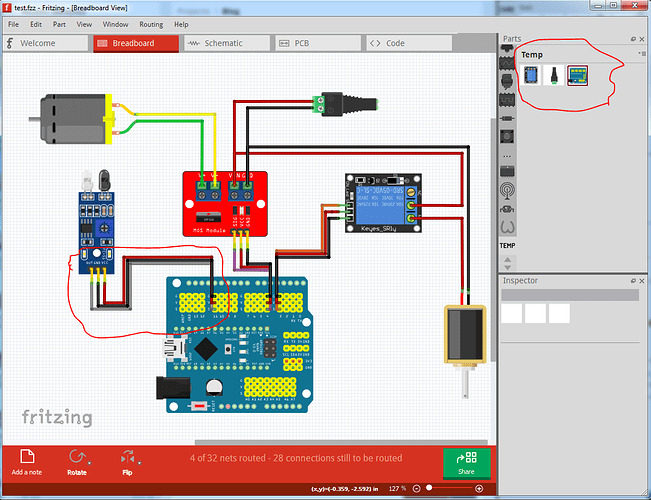 Several things to note here: the red circle around the fc-51 is how I would route the wires to make the connections clearer. To do this I clicked View->Set grid size and reduced the grid size from the default .1in to 0.05in: 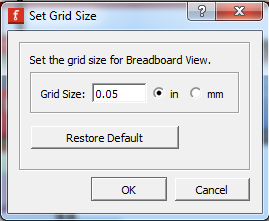 to allow closer spacing of the wires. The vertical layout of the nano shield makes the breakout more difficult, but with the 0.05in spacing you should be able to have at least a stub on the servo connector which shows where the wire terminates. The other thing of note is I have less parts in the mine parts bin (the red cirle on the right top.) That is because the barrel connector and the fc-51 are both now in core parts. You probably need to click Help->Check for updates to update the parts repository to the current version. In any case here is the .fzz file which now loads correctly for me:

Thanks for the tips on how to set the grid size so I can make the wires look more organized, and I wouldn’t know it can be updated until you told me to. Updated for now.

The test sketch you provided can be loaded at my side without problem.